How to Get An Audience to Your Shows 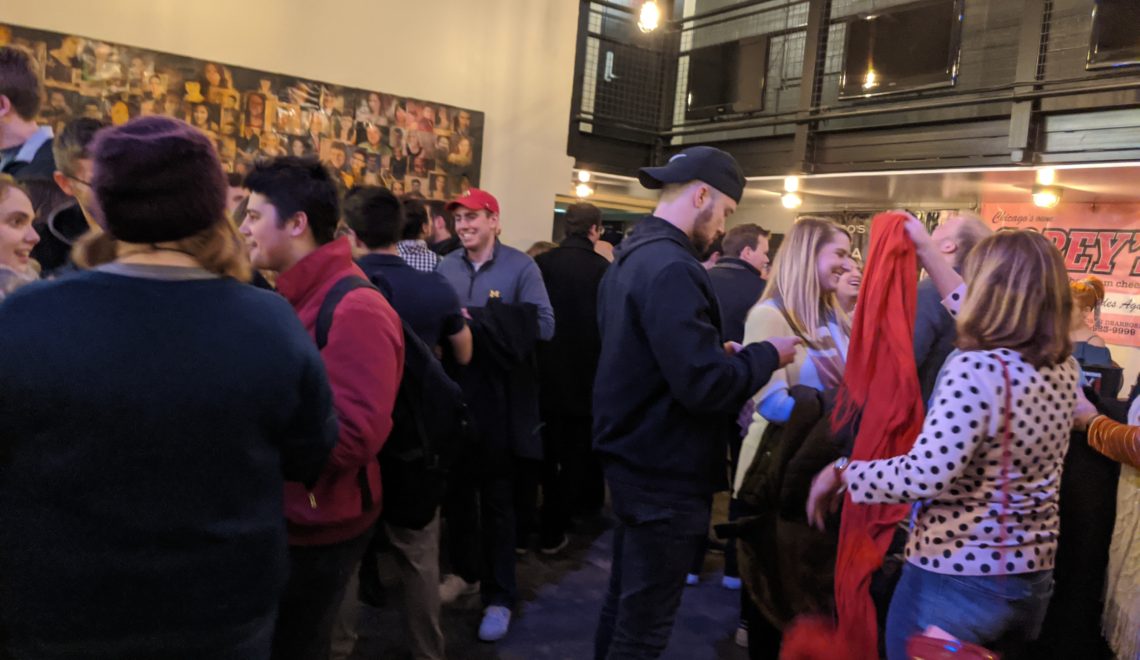 How much of creating sketch comedy is a communion with your audience and how much of it is yelling into a people-less void? Both of these models of dramatic expression have value. If you’ve ever talked to another human being, you know that it’s mostly a good thing, even if that verdict of “good thing” is sprinkled with about six billion pinches of salty addendum. Still, discussion tends to clear up confusions and grievances between we fellow humans. Talking is also the cause of many confusions and grievances amongst us, sure, but I would argue that these are more often the symptoms of some,  followed by not enough communication. One side of the exchange assumes one thing whilst another is assuming another thing, both know that assuming isn’t usually the best thing but they don’t even realize that they are in the act of assuming (one of the terribly tricky parts about assumptions: they tend to bury themselves under other bullshit; which is why they say that “assuming” is a portmanteu of “ass” and “inhuming”) So it’s prudent to occasionally hash out matters with someone who can view what you’re doing from an outside perspective, which often appears nothing like what you had assumed that you were doing from the vantage of your interior periscope. In not as many words: peeps be needing peeps, y’all.

Unfortunately, asses aren’t always available for other asses when they require someone to listen to their varigated cries of “I’m sad right now, hugs please!” or “I’m hungry! Gift me banana!” or, more germanely to a live sketch comedy show:  “Look, this is funny, I swear it is!” This is where the screaming into the void scenario comes into the picture. Have you ever done it? Have you ever just found yourself completely isolated and then screamed at the nothing and the nobody? It feels good. At least, it tends to make you feel slightly better than you did previously, if only because your own wail was picked up by those very ears that you regularly use to listen to all of the other things that aren’t your own internal monologue; so when you hear your own voice echoed back at you, it provides the wispiest of hopes that something that is not merely your own voice has happened to wander within earshot. To jazz up the classic philosophical quandary: if you write, memorize, rehearse, and perform a hilarious sketch comedy show at the Jesters’ Jungle Club but no guys nor dolls were around to dig that smiley jive, were your japes but wastes of your mojo? No, of course not, bobo.

However, a couple hepcats out and about would have been nice. 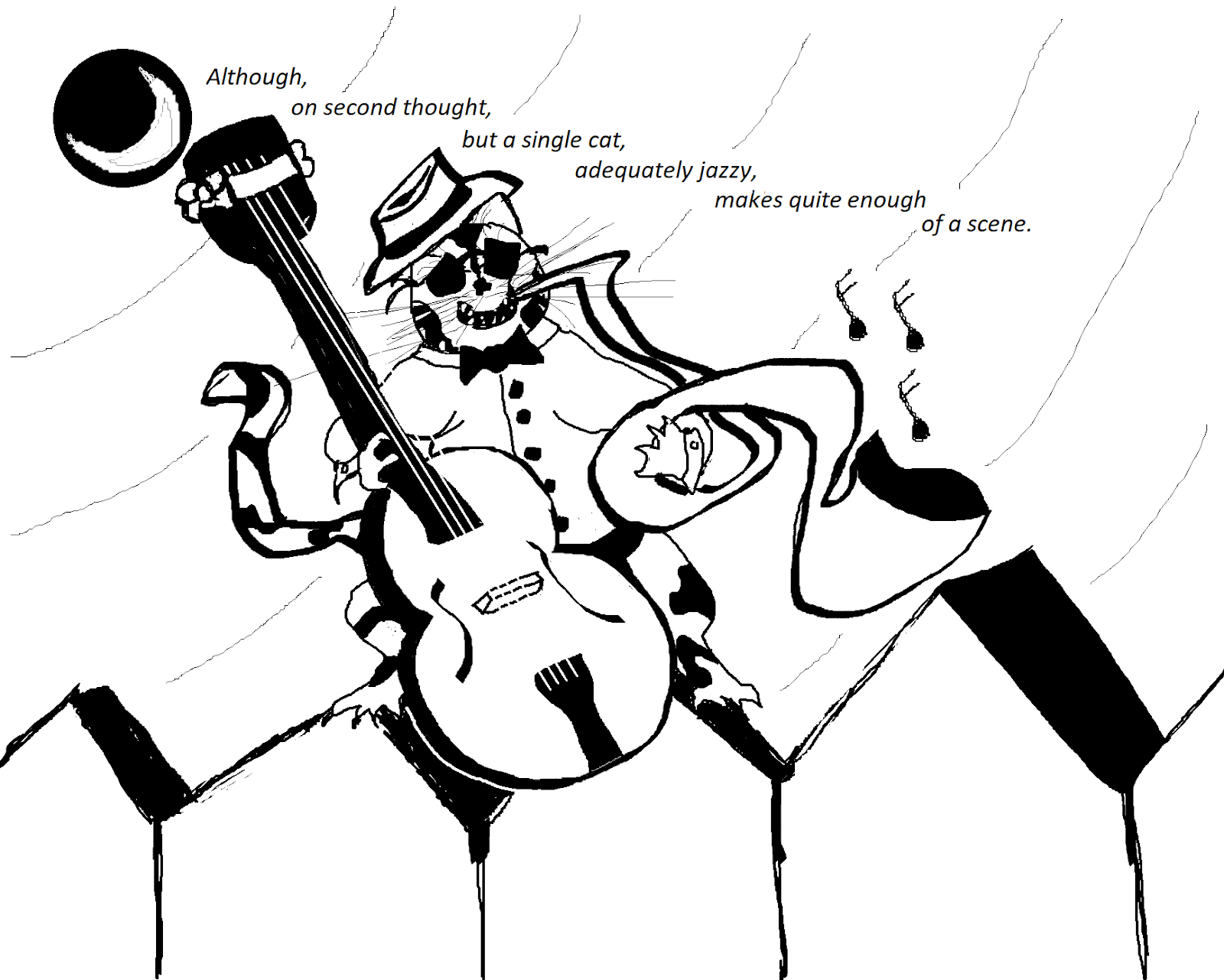 In my experience, there are only three forms of promoting a comedy show. Anyone who tells you different is both promoting something themselves and is likely far better at it than I am; so if they’ve written a blog post about this topic you should listen to them. My three forms of promotion are: 1) Flier Placement, 2) Facebook Posts, 3) Faithful Prayer.

The first, Flier Placement, is virtually useless. My troupe and I tried this alot when we started. A pro of this approach was that you got to create an awesome flier. This got one flexing some of their mad graphic design skillz (back when we started doing sketch comedy, saying “mad skillz” was in vogue.) Also, going around town placing fliers in coffee shop windows and on library corkboards was just friggin’ cool. It was, in the parlance of the day, “the Bee’s Knees.” (Did we start near the turn of the twenty-first century or the nineteenth century – who’s to say?)   It made our troupe feel sort of like it was a struggling indie rock group, contributing to the shaggy vibrancy of our local culture, and who doesn’t want to be a struggling indie rock group? We were basically that, except without the music part – we had the struggling and the indie aspects down – down like the crown on a playing card’s clown (which was another very common expression in the time period apart from the stream of existent history from whence sprang my sketch comedy troupe.)

A downside of flier placement was that we learned a lot of people involved with our local community were somewhat dicks who didn’t want a couple of schmucks off the street papering their small businesses’ windows with proclamations that there was a  “Tang-dustrial Revolution” [as in poontang revolution] coming to town. In hindsight, we maybe should have thought a bit more about how certain of our show titles would come off displayed in public venues (or a bit more about certain of our show titles, period), but I still blame it predominately on a paucity of civic gusto amongst certain independent java house proprietors. That said, most folks were chill with us placing fliers – which was both rad and excellent. However, most folks walking by were equally chill about reading the fliers or coming to the shows – not rad nor excellent. This shouldn’t surprise anyone who has ever charged past a local goings-on board. I sure as hell don’t commit many chunks of time to perusing street fliers. The golden rule of “treat others how you want to be treated” can always be extrapolated to “expect others to treat you as you treat them, jerkface” and if you’re seldom likely to check out a live show based on a paper flier, it’s a good indication of the practice’s general efficacy.

This leads me to the digital fliers of the twenty-first century, also known as Facebook Posts. While they are the same essential idea as old school paper promotions, they do have several advantages that make them slightly more useful to comedians. The core one is less walking. This is more important than it might sound because, much like the golden rule, it’s a virtue that reflects onto everybody on both sides of the equation. As a comedian, you don’t have to venture to a dozen different locales where your odds of receiving permission to post are constantly being reset to “who knows?” Facebook is infamously, (some have argued criminally) indescriminate with what it allows data bundles / people to post. This may or may not end up being great for our society at large, but it means that the risk of seeing your efforts dashed by the whims of myopic brew barons is greatly diminished. From the comfort of your own Doritos stained couch and for the price of nothing you can boldly throw a flaming hot Facebook Post up into the face of every friend of a friend you ever had (people who know you from elsewere were likely going to be the big cat’s share of your audience anyhow) create an event with a link making it easy for them to purchase tickets, and continuously ping everyone with reminders that the show is coming, the show is coming, dear god, the show is coming! The mill waters of the Tangdustrial Revolution will not be dammed!  Also, for a few bucks – still likely less than you would have shelled out to have a stack of fliers printed at a Kinko’s – you can boost the post to get your promotion blasted into the face of any nearby stranger who made the mistake of admitting to the internet they have an interest in live comedy. They probably won’t come, but they’re still far more likely to check it out than the strangers who you can only be confident have an interest in drinking coffee and/or walking down streets. Thanks to social media, they, like you, no longer have to move or put unseemly amounts of effort into this thing they enjoy doing. It’s better for everyone. Too much energy expenditure always has downsides.

Ultimately however, although Facebook requires much less expenditure of elbow grease, it probably won’t generate much more “profit,” meaning additional audience members (and, I suppose, actual money ticket profit), than anything else. This is why my third promotional strategy is the only one that you’ll ever need: Pray, child. Pray faithfully and pray often. Pray to the Judeo-Christian God and/or to the gods of old. Pray to whatever dieites of whichever culture you want. Pray not even to a “god” persay. Pray to the universe. Pray to the chaos. Pray to the lonesome void. Pray that a few people will come and witness what you have spent so much of your time and effort and hope and despair upon.

My point here is that I really have no idea how to best get an audience to shows. Reality is confusing and frustrating and in so many words: peeps are gonna do what peeps do.

I apologize for the misleading article title.