If your looking to make a sketch comedy themed pilgrimage in the United States there’s probably only a handful of locations that jump to mind and Chicago is probably at the top of that list. In terms of number of groups, the Chicago Sketchfest held every January at stage 773 is probably the largest sketch specific comedy festival in the country. This year I attended with my solo show Thunderstood (Al opted to save some money, recover from the holidays, and not venture to one of the coldest places in America during one of the coldest times of the year.) The first time attended this fest I was way back in 2013. Most of the groups I performed with back then have long since disbanded or developed some sort of career success, but I’m still doing the same stuff, YAY!

(Hotel Sponsor Hotel Versey: walkable to venue if not stupid cold and snowy)

The venue itself has 4 theaters of various style that simultaneously run shows.  As an audience member so much comedy in one building makes this festival’s pass one of the best bangs for your buck if you want to see a bunch of different sketch comedy groups and styles over a the 2 week run of the fest.  My show was in the “Cab” theater this year which is a intimate(theater talk for smaller venue) cabaret style space in which a number of the solo shows are performed.  Here’s a basic diagram of the space. 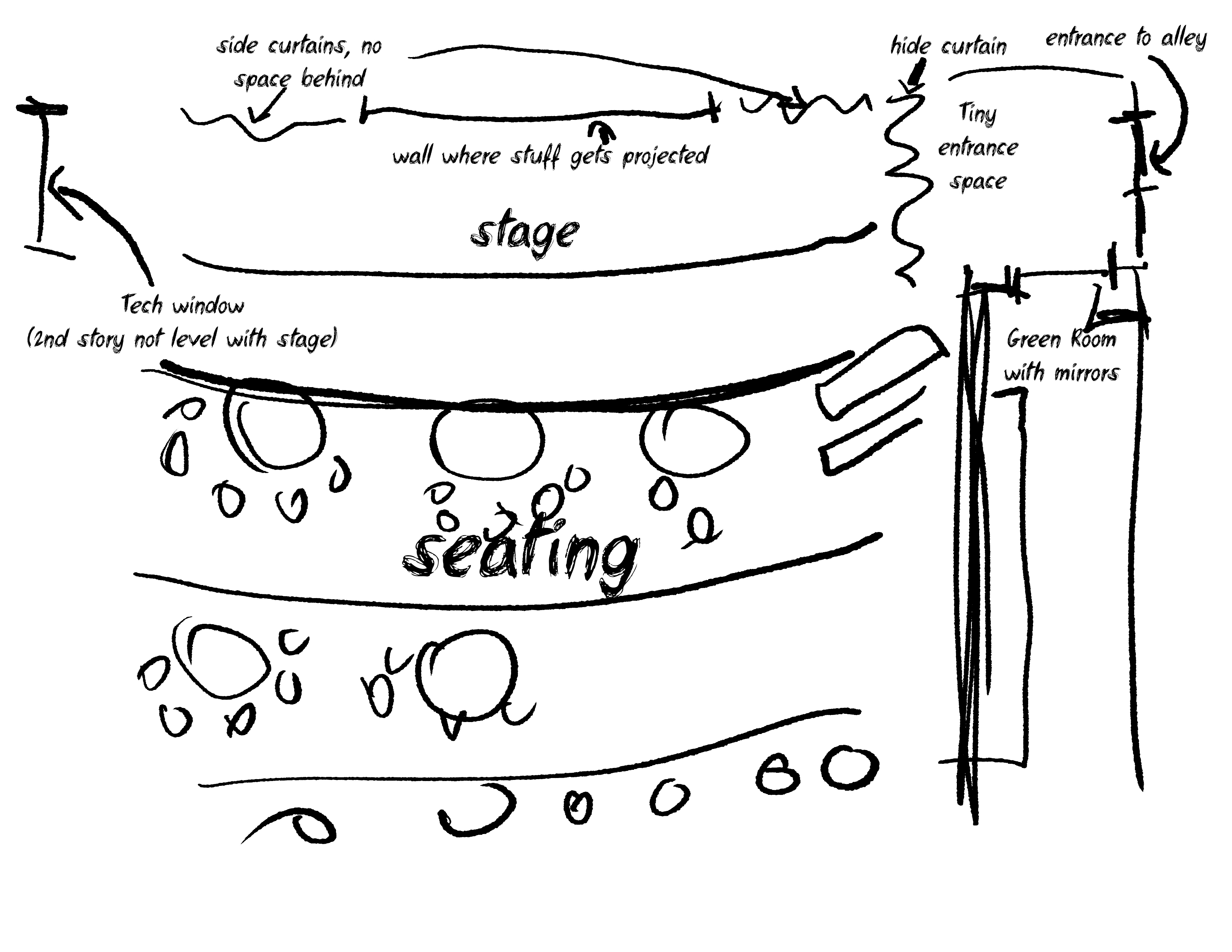 The cab is a nice setting, but it definitely has it’s foibles especially for a show that’s as tech heavy as mine.  If you’re using projection, the tech operator can’t see what’s being projected due to the position of the booth in relation to the stage. The guy running lights for me was real pro and I was running my own sound and video cues, like I do, so it really wasn’t a problem for me this time around but in my first appearance back in 2013 it definitely caused some issues. This was one of the reasons I waited 7 years before doing solo sketch again in Chicago.  Also, I’m fairly certain the same projector has been in this space for a decade or so and it’s on its last legs. The image is pretty dim even in total darkness let alone if you’re doing some kind of interaction with it. (If you’re planning on hooking up your own computer in here be aware the current projector only takes VGA so make sure you have the right adapter). Other than that small projector complaint my shows were a lot of fun in this space.

Chicago Sketchfest does a couple of things differently than most festivals.  The vast majority of fest I’ve attended, shows are at least double if not triple billed, Chicago instead gives each group their own 40-minute slot and out of town groups get 2 slots to fill. This is great in terms of getting to do more material but it also means your opportunity to meet other groups relies on events other than your main show. Also, since you aren’t paired with a local group you don’t get to piggyback onto their fanbase.  This means you’ll have to do a little more leg work to get an audience in especially if you’re in one of the smaller venues that doesn’t carry as much prestige. Seeing as shows are single billed there’s also not really a “host” for sets, instead the festival has a tradition in which of a group of festival volunteers run in right before the show starts to scream the names of the sponsors and introduce the group.  You might love this tradition or you might hate it, but it’s going to happen either way and its definitely worth commending the effort to rev the audience up and sheer expenditure of energy it takes to do this before each show.  The staff at this fest are true heroes considering how many groups they’re dealing with, they really do a good job of communicating when the house is opening, places etc…but while I’m on the topic of preshow in Chicago I should probably bring up one other little foible.  Because there are so many shows going on at once the lobby gets pretty packed before shows, so rather than entering in through the main building before your show you check in at the building next door and are then brought in through a back alley.  This building is owned by the theater but primarily used for storage, which means it doesn’t have heat so make sure you’ve got some warm clothes for your warm up and be sure to thank the volunteer working this space, you can find her huddled over a space heater the entire night.

After I was done performing, I made full use of my pass to see a ton of shows. The first night I was there I saw Brick Penguin from D.C. These guys are festival veterans and I’ve seen them all over the country so I knew at the absolute minimum it was going to be a really solid set.  Their reality show parody of Short Hull Truckers was one of the stupidest (aka favorite) premises I’ve seen in a while and I mean that in the best possible way. Their writing is always strong and they definitely elevate scenes with the way they throw themselves into performances. Brick Penguin transitions are also one of their trademarks, the energy in which they dance and scream through the audience is always infectious and sometimes involves free candy.

For my 2nd show of the night I decided to leave the confines of the cab and head over to the thrust to see Church Bassment.  I had seen one of the members of this show in his previous project Rabbit Rabbit, which is one of my favorite groups to ever come out of the Chicago scene ,so I was really looking forward to this show.  I absolutely loved the concept of this show which cast themselves as a high school band playing at a school sanctioned event and even featured cookies and punch for anyone willing to walk up and help themselves. The show its self-featured some hilarious character pieces as well as some incredibly fun pop punk style comedy songs.  My only wish is that the sound in the space had made it a little easier to hear some of the lyrics as the ones I did catch were insanely clever. The song “Ghost Boy” in particular has been running through my head ever since I saw the show.

I started the 2nd night off early catching “Stuntmen” in the pro theater.  The show had a general action theme which isn’t a style I’m personally super invested in but I still found the way in which they used the stage to be impressive. They’re bit in which a man sees his life in reverse right before death was a particular highlight and wonderfully choreographed. Also, I think my wife has definitely grown tired of my singing “pizza for lunch” in her face, and the Stuntmen are to blame of this.

Generally, I don’t see anything in the slot right before my show as I like to pace around aimlessly, but I made concerted effort to get over myself and go see Anne Zander’s Juicebox since she had been kind enough the previous night to stick around and watch my set. Holy shit she was funny.  The show is really a one-character play, in which “Jessica” has a bizarrely comical coming of age/sexual awakening. Anne is fully aware of the audience through out the piece and uses interactions and reactions with them to hilarious effect.   Shows like this make me grateful the fest gives out 40-minute slots as I’m sure it still would have been quite funny in a shorter set but the longer length really allowed us to go through the character’s journey. My only real complaint about this show was that it was criminally under attended, if you get a chance to see this show.

After my show I made my way back to the pro to catch Toronto’s The Wow.  If you talk to me about live sketch comedy for any length of time, I’ll probably volunteer that my 2 favorite sketch comedy “scenes” in North America are Philadelphia and Toronto. So, since The Wow is kind of a Toronto super group comprised of members from a number of groups I had previously seen and loved this was the show I had already picked ahead of time as can’t miss.  Sometimes “Supergroups” don’t really coalesce, but the Wow gave everyone a chance to shine. The group also utilized one of the widest array of types of sketches in their set, the handled scenic, townhall, and character pieces all with equal aplomb. From this set, Carson Pinch’s Fast and the Furious sketch was already one of my favorite things I’ve seen in the past decade and I now also add Craig Scorgie’s sandman bit to that list. (although I’m grateful I was not gifted any handfuls of sand). Because I watch so much of it, I’m generally fairly stoic while watching sketch comedy these days, smiling and saying to myself “that was funny” but the Wow made me actually laugh out loud on a number of occasions.

After the Wow’s show I ran back to the hotel to drop off my props and then return in time for Sketchubator.  I mentioned before that single billing makes it a little more difficult to meet other groups, but Chicago remedies that with Sketchubator. The event gives some free drinks to the performers and then packs them into the pro theater to each perform a single sketch.  I’ve participated in the past and it’s always a good time, but this year I decided to just sit back and have a beer without having to get on stage myself. I won’t get into everything I saw there but it’s always a good time in which groups often due some of their most outrageous sketches and you’ll probably see the volunteers and staff get extra wasted as they celebrate having another weekend of sketchfest in the books.

So that concludes my Chicago wrap up but I do also want to mention I got this sandwhich, 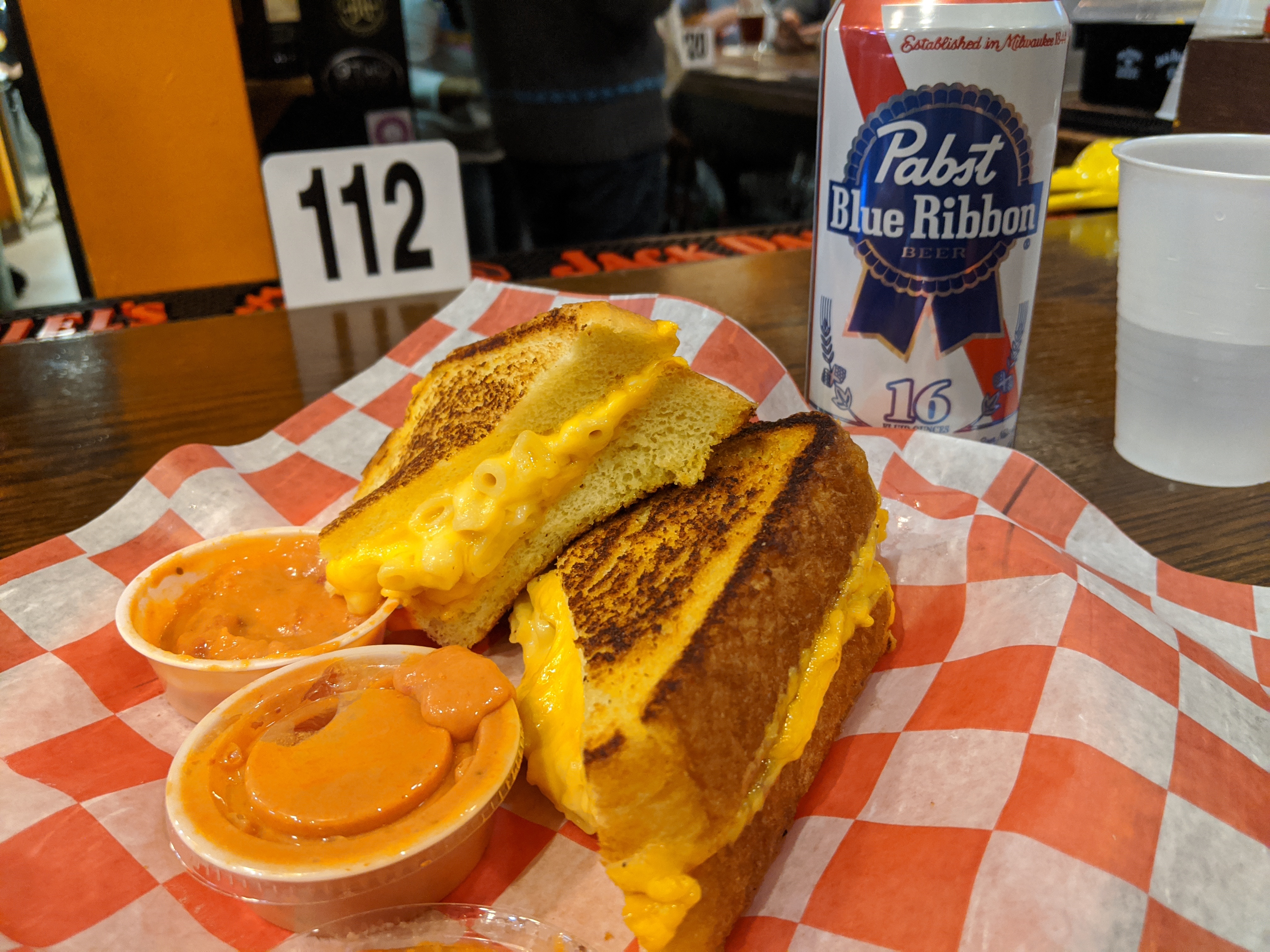 it was ridiculously awesome and not stupid expensive, if you’ve already had your mandatory soup of a pizza experience in the windy city I’d definitely recommend Cheesie’s Pub & Grub Lakeview for your carb fix.