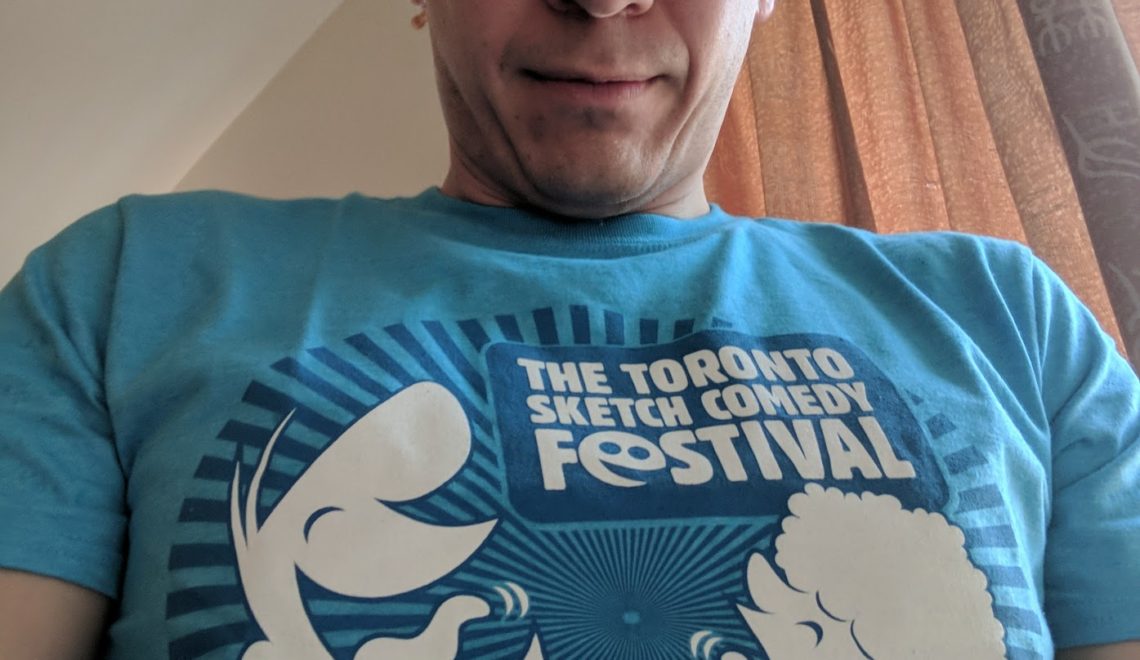 I’ve put off writing this festival recap for a while.  The romantic part of me would like to believe, that since this festival was my last comedy experience pre covid-19, that perhaps writing it down would involve coming to terms with something I wasn’t quite ready to let go of.  It also could have been immense laziness (but this is a rare time when I think both are actually legitimate excuses, so whatever). 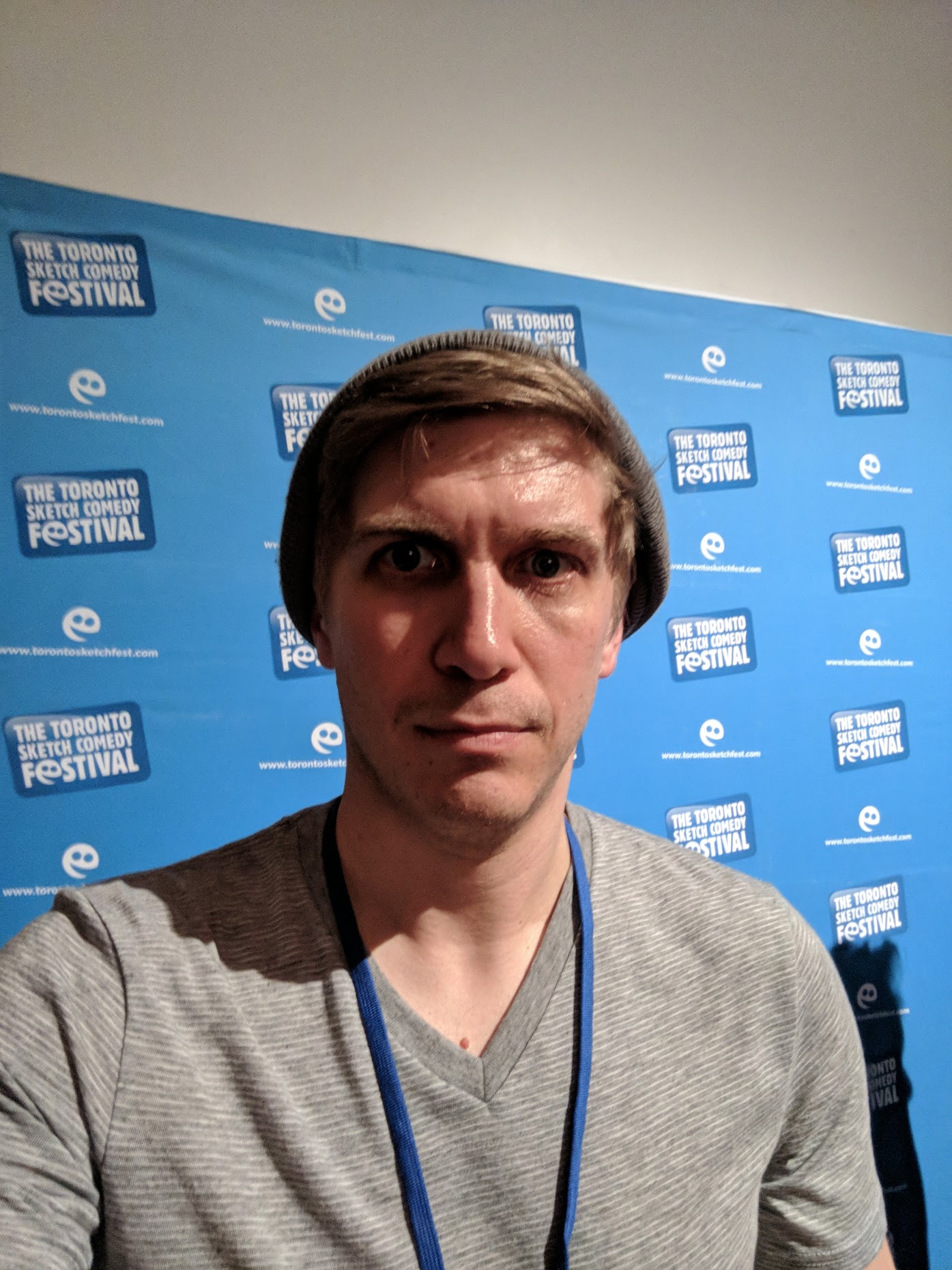 Because I took so long to write this recap some of my specific recollections aren’t super concrete but the general sentiment that Toronto Sketchfest is one of the best festivals in North America is very clear.  The team that puts on this fest are absolute rock stars and deserve far more praise than this poorly updated blog can offer.  They dealt with all kinds of shit this year with Covid-19 being the shit icing on the shit cake, and through it all they still went out of there way to look out for and support relatively unknown sketch comedy performers at an absurd level. This attitude of gracious hosts doesn’t stop with the organizers, it extends through the entire Toronto sketch community. I was at the fest performing my one man show Thunderstood and generally I’m slightly resigned to having decidedly less fun when I’m traveling by myself but the Toronto scene is damned inviting. Nearly everyone I met was an absolute joy to be around.  As opposed to some other cities with large sketch communities (New York I’m looking at you) The groups I met in Toronto seem to legitimately not only love sketch but they’re actively rooting for each other as well.  The end result is the performers always seem to be there for each other on stage and I never get the sense that they’re only biding time till their next line. (even if they secretly are…they’re that good of performers!) 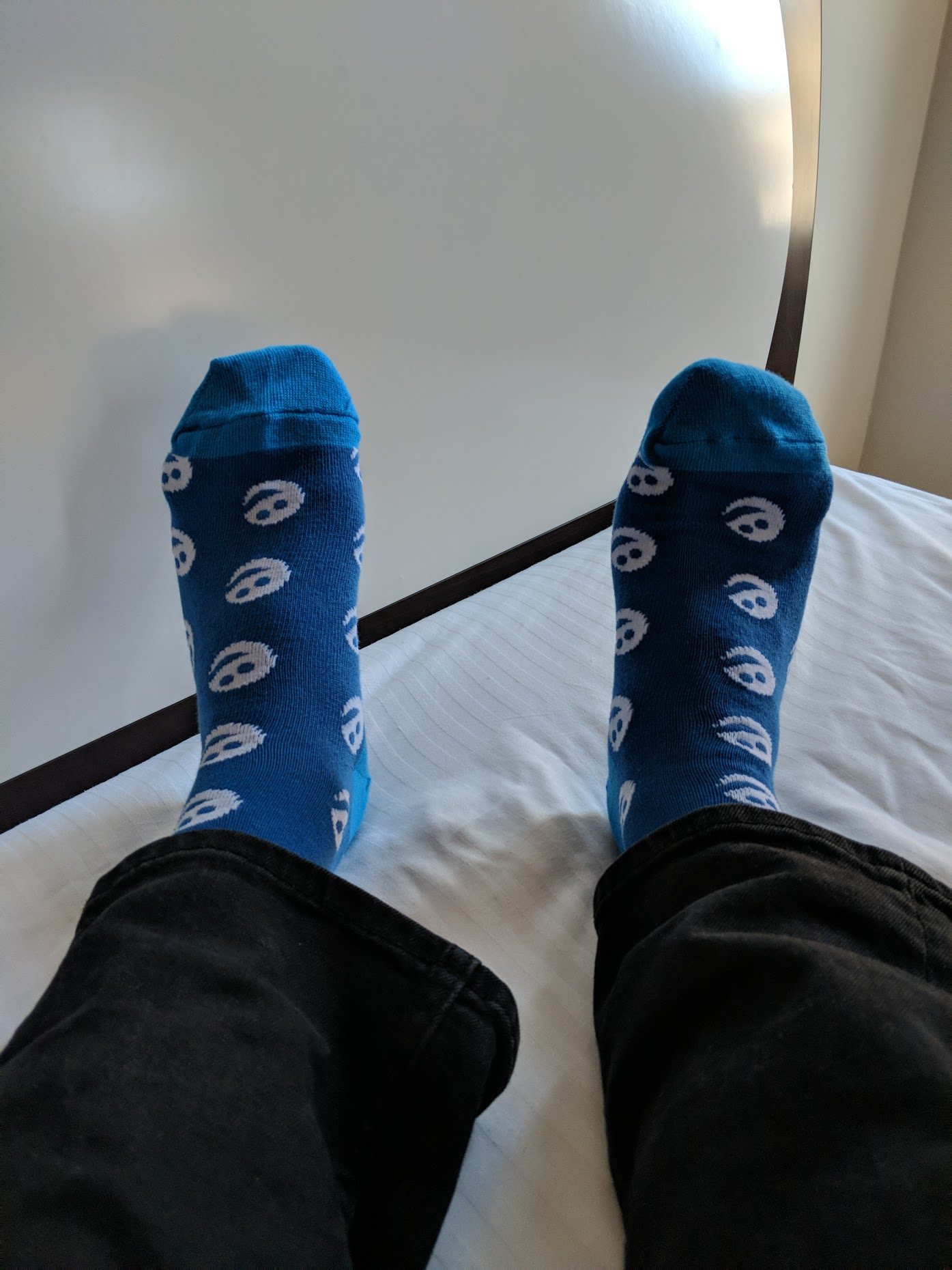 They’ve got great merch at this fest!

I was lucky enough to be scheduled in the first week of the fest which meant I got to get my shows in before shit blew up. It also meant I got to see a number of amazing shows with the audiences they deserved.  I often sometimes try to write recaps of some of my favorites but unfortunately things have gotten a little too hazy for my in-depth reviews and instead I’ll just say a sentence or two about some of my favorites that I saw.  Carson and Taylor promise to do a bunch of flips, more than paid off on it’s name. While the physical bits were skilled and paid homage to an older era and the writing was incredibly sharp my true delight in this show was how much the performers trusted each other. YAY friendships!   Sex T-Rex was one of the most polished shows I’ve ever seen. Sometimes it feels like sketch hangs around theater like it’s kid brother who’s into punk rock, but they brought a level of production that I’d more likely expect from a touring production at an arts center, so kudos to them and the tech running the show!   Elena Skopetos delivered a master class on character work and if that weren’t enough even incorporated a delightful through line of trying to impress her dad and is an earnestly skilled singer that I would listen to even if the songs weren’t hilarious, but they are so…double bonus!  I got to share a slot with Room 28 my first night of performance and enjoyed them so much, I snuck into their show the 2nd night as well. Although I ragged on New York a little earlier everyone in this NYC group had an earnest bond, and were fantastic performers.  Their commitment to character was infectiously fun.  My 2nd night of performance I got to share a slot Public Works who has a darker sensibility, that a chunk of the audience in the show I saw didn’t necessarily get on board with, but that I truly enjoyed.  I snuck backstage before their set finished so I could begin my own lengthy freak out ritual but being back there for their last couple sketches let me see them acknowledge when the audience wasn’t necessarily vibing with them and still gleefully jump back on stage, which won them extra points in my book.  Of all the shows I saw my personal favorite and one that just made me laugh the hardest has to go to CRAIG SCORGIE IS A GROWING BOY maybe it’s because I also enjoy multimedia integration, or because of the level of absurdity he added to every concept, but I think it’s mainly because of just how much stupid fun he personally seemed to be having during the show. His joy made watching him impersonate his own father talking about a tarp a true highlight of the fest. 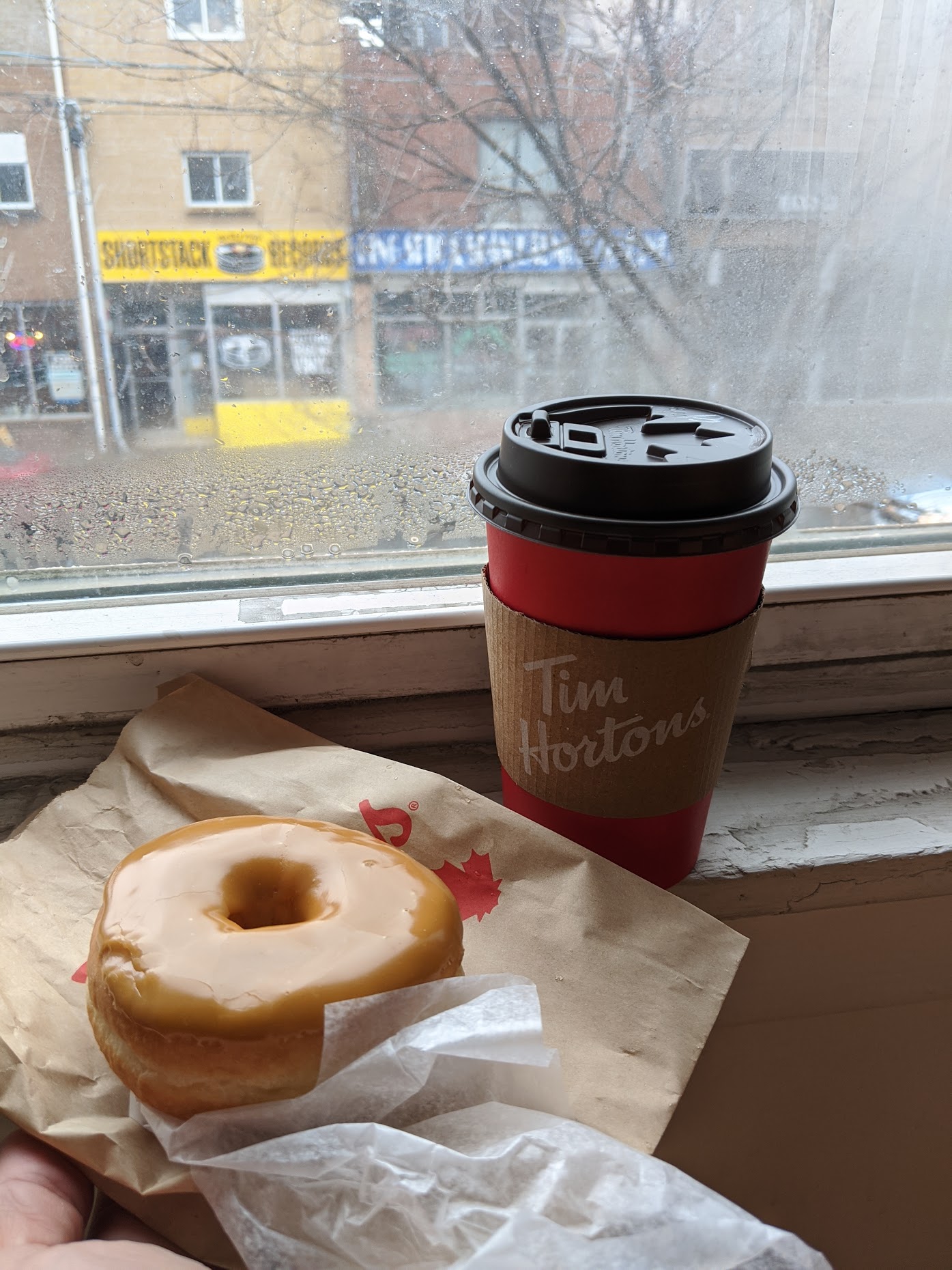 I ate a lot of maple donuts there.

In addition to seeing amazing shows the fest also offers some fantastic events for performers.  Industry mixers, out of town brunch, and sketch train were some of the ones I attended but there were also a number of other fantastic gatherings and talks that once again show how this fest goes the extra mile and really care about performers. Shoot they even gave us pizza and beer and had someone talk about unionizing opportunities.  Plus one of the festival sponsors is Steamwhistle brewery so you performer badge includes a free tour, I also recommend the pretzels at this establishment.  If it’s your first time in Toronto also leave sometime for just walking around and checking out the amazing street art here. 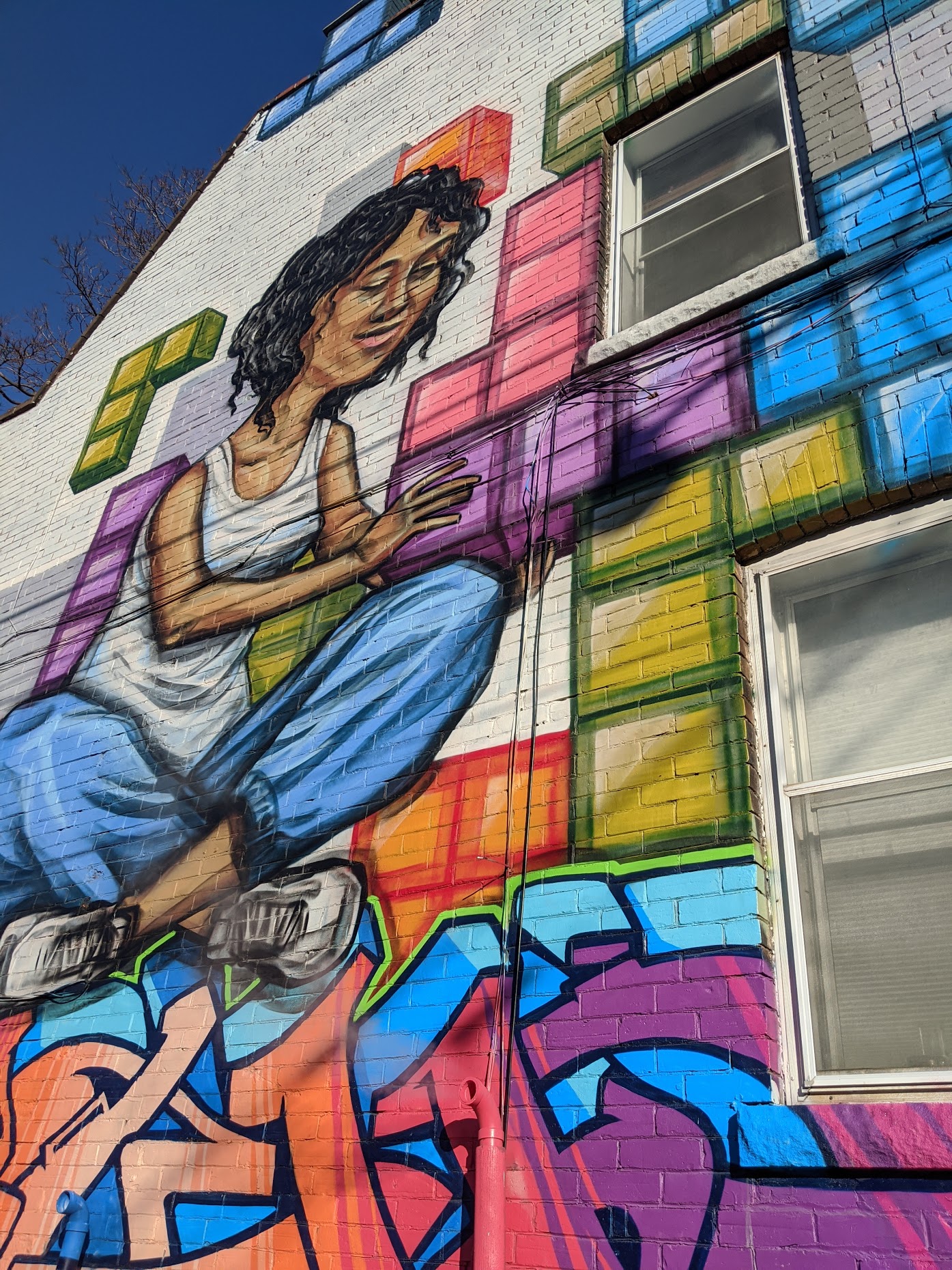 My own performances were also a blast and went off relatively smoothly other than almost hitting an audience member with a sword.(Retractable 5 dollar ti chi sword seemed like a great prop buy when trying to fit stuff in a suitcase, but doesn’t necessarily hold up structurally). Both of them took place at the Comedy Bar. Generally, bar shows are something I dread. They’re relatively tough for comedy in general and near impossible for sketch comedy. The comedy bar however, is very different and is actually one of my favorite venues I’ve ever performed in. It was definitely designed by people with comedy performance at the front of their mind and the tech capabilities make you feel like sketch in particular wasn’t just an afterthought. Áine even sent out a full venue package pdf ahead of time to give a performers a great look at what they’d be working with. The venue has two different spaces and both are dedicated performance areas separate from the packed bar.  Every time I’ve performed here, I’ve had a ridiculously good time. Here’s a little diagram of the venue I was in if you ever have the opportunity to perform here.

The only minor tech warnings I would give is that their screen is mechanically operated from the back but is very slow. So if you plan on incorporating video you might want to be strategic about it so your transitions don’t feel like they’re taking forever.  Also they perform sketch here so often there’s a good deal of props and set pieces backstage so your entrances should probably come directly from the dressing room since there isn’t much of a cross behind.

The backstage area is a little cramped if you have 2 large groups with a ton of props but it’s easily accessible through the bar area so you really don’t need to be in there until right before your show. Also the fest provides an intermission between acts which is a rarity that actually allows you to sit in the audience and see the set of the group your performing with. 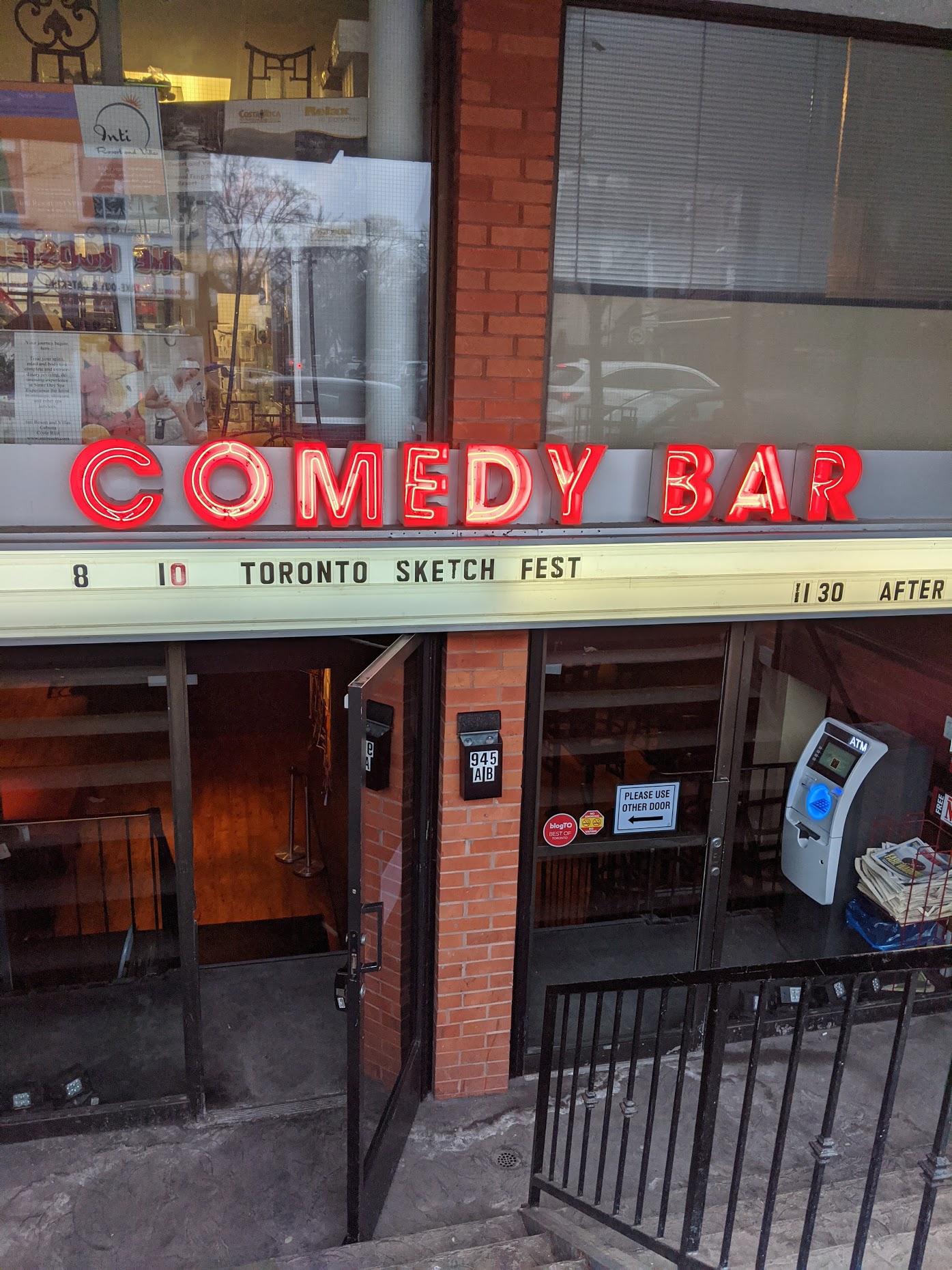 Having to walk down steeps to get into a venue always makes me feel important for some reason.

The festival had another week of shows after I headed back home, but I was still on the performer mailing list.  This meant I got a small glimpse of the lengths the team had to go through as shit began to hit the fan. On the upside I also got to a distant look at how this true community of sketch comedians banded together to support and inform each other as things got weird.  I got see one of my favorite performers Cam Wyllie who I was unfortunately scheduled in opposing time slots with when I was actually there do an emergency show last minute over live stream and find out a man infected with SKA brain is something my own stupid brain thinks is one of the funniest things imaginable.  Ultimately the fest had to postpone their best of show, which sucks but I know that it’ll exist in some form in the future.  For what its worth they gave me one of the best possible last normal comedy experiences before this all happened that I could possibly imagine, and for that I will be eternally grateful to Paul, Julianne, Damien and the rest of the Toronto Sketchfest team.