This is part two of our late September festival journey you can find part one here.

Day Two of our weekend adventure began with my alarm waking me up at 6 in the morning.  I’ve got weird internal gripes about hotels that don’t provide free parking for guests. So even though we got a really good deal on the room, I had opted to park in a metered spot that didn’t have a fee overnight but did require me to lose four hours of sleep to ultimately save 10 dollars…I regret nothing about my decision.  The drive to Charlotte from Atlanta isn’t crazy long so after eating the customary hotel waffle, we still had some time to kill in Atlanta. The center for puppetry arts was only a couple blocks away so we decided to use our morning to check that out before hitting the road. This place was awesome! I consider the works of Jim Henson and company to be some of my earliest sketch comedy influences, I even chose a Muppet show sketch to dissect when we made a guest appearance on Bad Medicine’s Sketch Nerds podcast. This place was a dream to me that I get giddy just thinking about. If you’re ever performing in Atlanta definitely make it part of your trip. 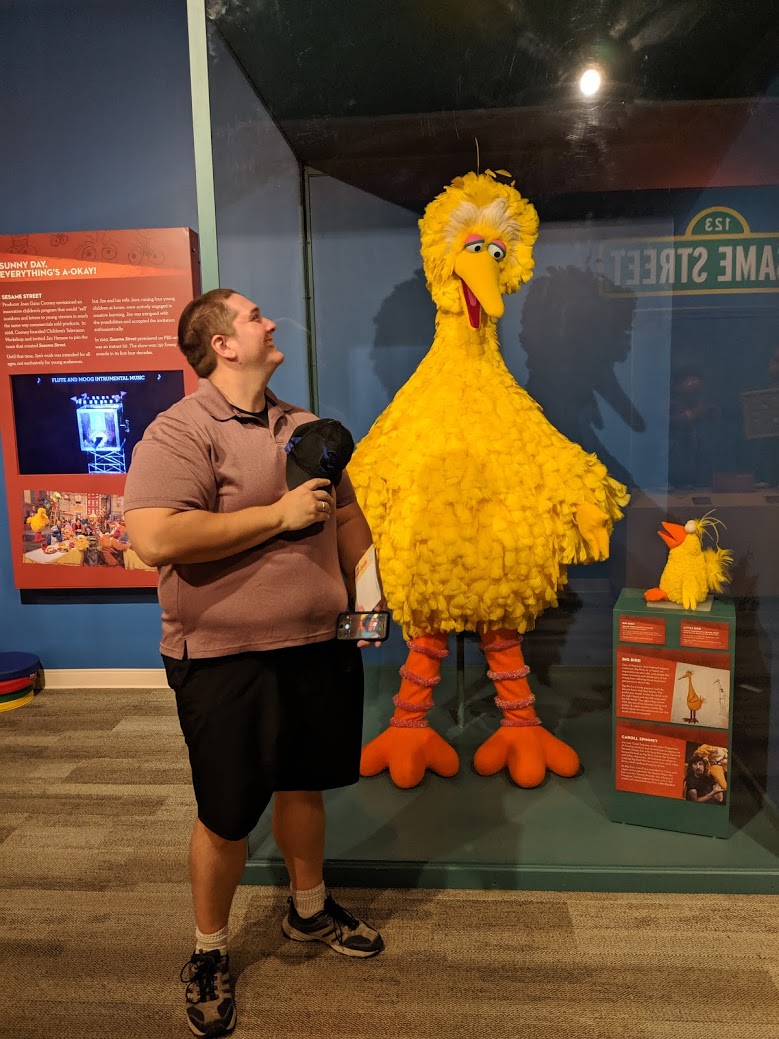 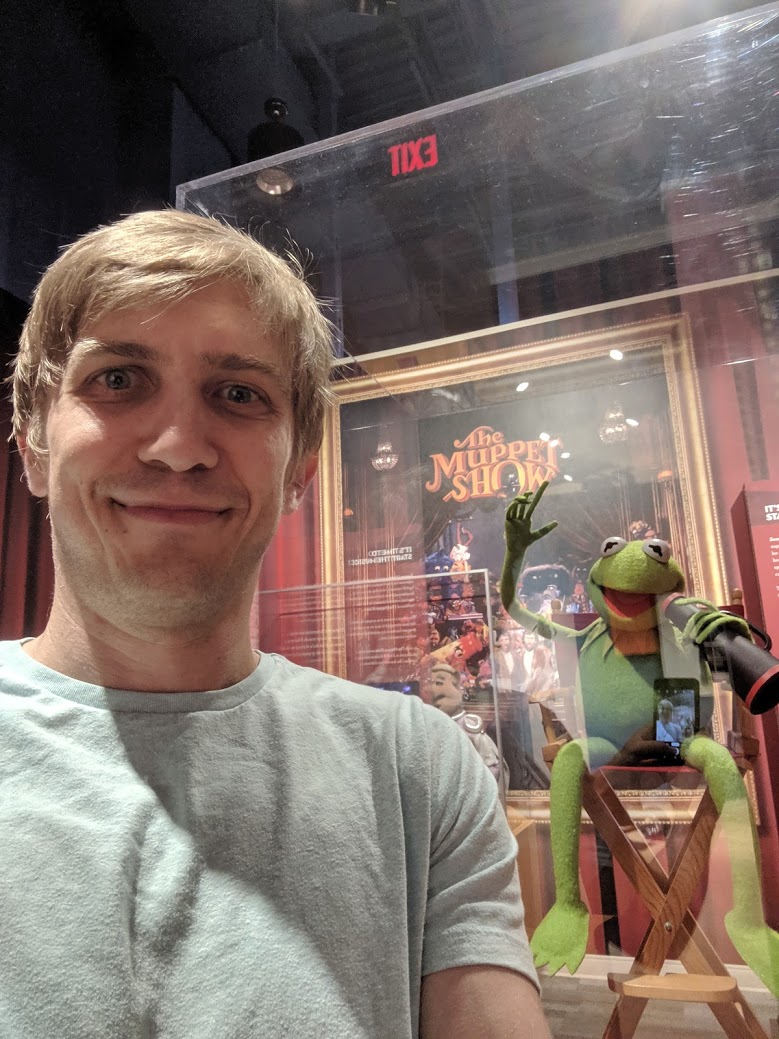 After geeking out for a bit, it was on to the Queen City!  I’m moderately certain this was the 3rd Year of the Queen City Comedy Experience, and the 2nd one in which they’ve had the power (and money) of the Blumenthal Performing Arts center on board.  This powerhouse backer has helped make the Queen City Comedy experience a huge event but despite this fest being bonkers big the original producers/founders are still heavily involved, genuinely super nice, and extremely funny.  Having some money behind the fest helps offer this fest a few unique privileges. First off there wasn’t a fee to submit (I don’t know how long this will last because I know slogging through tapes of various quality from hundreds of comedians is a monumental task) Secondly, they’re able to bring in some big names.  We directly benefited from both these perks as I instead used the submission fee money to cover more street parking and we were given a slot opening for a workshop showcase led by Kid’s in the Hall alum Kevin McDonald.

We had a relatively late slot but wanted to get there early to support some other friends that were performing and take advantage of some of the other perks of the fest.  As far as festival greenrooms are concerned Queen City has one of the best.  There’s plenty of finger food, water, and last year they gave us two drink tickets when we checked in.  This year we did not receive drink tickets, instead there just a large barrel of beer in the green room, I much prefer this method.  The festival also offered free headshots to festival performers.  Although these shots aren’t really a substitution for a full headshot session with different looks it’s a great chance to get a little extra promotional material.  The headshots were taken by quirk photography and were a lot of fun, if I were in the Charlotte area, I’d consider them for a full session.

After we gathered some free stuff, we popped into the stand-up show that we knew our friend Steve Lesser was performing in.   I definitely don’t consider myself any type of expert on stand-up,  but I feel confident in saying that this was consistently good and often great show.  I particularly enjoyed Steve whose intelligent buffoonery and absurdist literalism results in a sort of Brian Regan and Steve Martin cross pollination.  Another stand-out of the show was “Comedian He B. Foolin” who won me over before even speaking as he was wearing the merch of our good friends “Robot Johnson”.   I learned later that Foolin’s real name is Carlos Valencia.  Carlos’s set was an amazingly odd performance piece which made glorious use of a very stupid catch phrase. His very presence as the character was a hilarious gut punch to any self-importance comedians bestow upon themselves.  We were also treated to a drop in set by one of the festival headliners, Preacher Lawson. The dude is doing alright and doesn’t need a glowing review form this little blog, but he was fantastic to see live and was in complete command of the stage.

Fest like this have a lot of shows going on at the same time and generally don’t have a lot of time between shows in the venues. That means you’re normally not going to get a bunch of time to wander around in the space and do a tech run or anything, so I think it’s a good idea to at least peak in on the space so you can make any adjustments that need to happen. I’m extremely glad we did.  This fest transforms a few gallery spaces into performance venues, and we were in one of them.  They do a great job making a space feel like a show should happen in these areas, but it does highlight a common sketch concern that just doesn’t exist for improv and stand up, which is the ability to be hidden.  Here’s the layout. 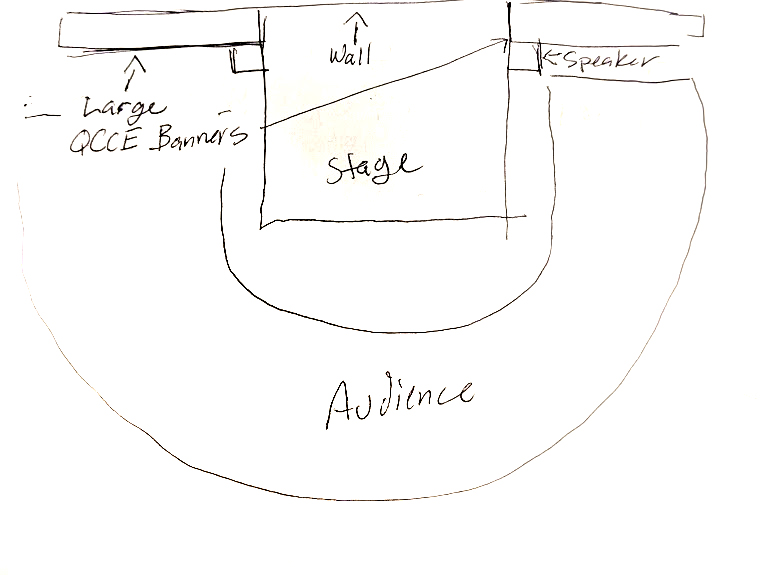 I was once again glad we had brought our pop-up screen, plus it proved useful when one of the sketches from Kevin’s workshop need to enter with a surprise vampire character.  Also, we hadn’t really blocked for a 3 quarter thrust so peaking in early allowed us to adjust appropriately and we even swapped out a sketch based on the angles we were dealing with.  There could very well be some safety and support reasons why the backdrops weren’t pushed up a couple feet to create a backstage, but as sketch performers its important to remember there’s just some technical aspects that aren’t a concern for the other forms of comedy and especially in a festival environment you need to be prepared as you can be.  The other small tech snafu we ran into was completely on us. The tech director for Blumenthal and the fest did a great job reaching out before hand and communicating that we needed to have our own stage manager to call sound and light cues. Unfortunately, pretty much everyone we know in Charlotte was either performing in the fest at the same time or at a bachelor/bachelorette karaoke bash.   Luckily the guy running lights was super chill and since we were running our own sound, he was happy to follow along to a script and pull lights.  If he hadn’t agreed to do that, we were fully prepared to just yell “BLACKOUT” or “SKETCH OVER” or “NO MORE COMEDY” at the end of each sketch. So just another technical element to keep in mind here if you don’t normally travel with your own stage manager.

But how did the show go? It was a blast. Cale Evans, improvisor and producer extraordinaire took on hosting duties and then local charlotte performer Megan O’Keefe busted out a smooth ukulele parody to help get the crowd going and then we took the stage.  All of use had a bit of an uphill battle at the start considering the small noise of 700 people in the lobby waiting to get into the Fortune Feimster Netflix taping that was running behind due to, you know, a legit television production.  But by the end of our set we felt like we had them firmly on board. Then Kevin took the stage to introduce the workshop sketches.  The sketches themselves were hot off the presses and had the appropriate number of joys and pitfalls that this entails.  If you fully consider how everything was written, blocked, memorized, and performed in a span less than 24 hours then they were extremely impressive.  I don’t want to take anything away from the performers themselves but one of my favorite things during the workshop set was seeing Kevin whisper notes to the next group about projection and minor stage adjustments that he thought would help them succeed in this space.  It was obvious he really loves helping new sketch performers and teaching them about this style of performance. 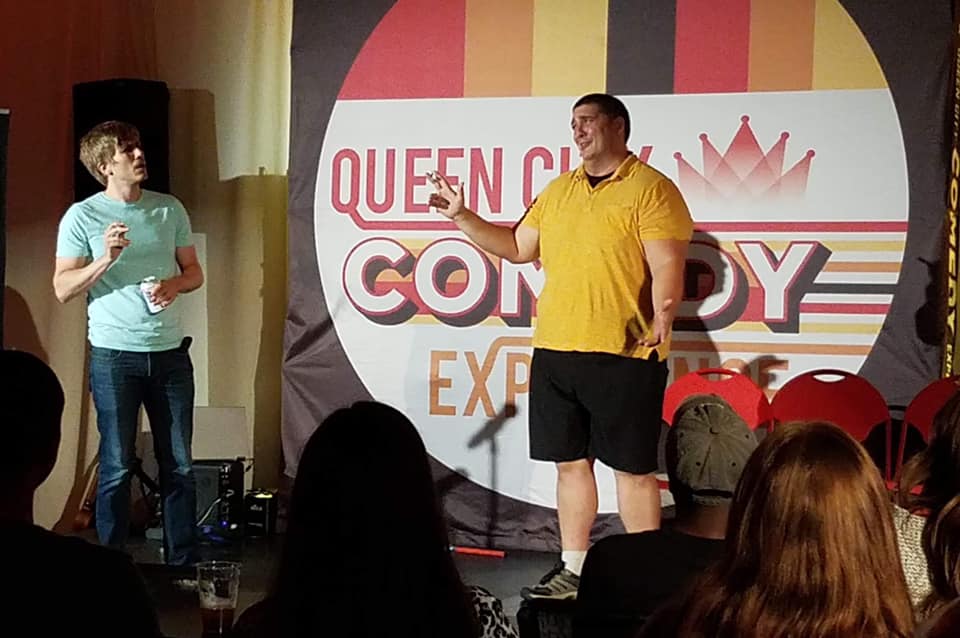 The final set of the night featured Kevin telling stories from his Kids in the Hall Days and then some local improv all stars using them for scenes.  Kevin’s stories were a real treat and I will forever wonder about the Dave Foley story which he brought up and then decided was too dark to tell.   The improvisors came up with some incredibly creative uses of the source material and while everyone had some great moments my regular favorites in the Charlotte improv scene really shined such as Elizabeth Byland, Andy Grosso, and Cale Evans. You can see several them perform together in Now We are the Foxes.   This was also my first-time seeing Mandy Bee of Dad’s Garage and she continued my steak of being blown away by everyone I’ve seen come out of that Atlanta institution.

It was also during this set that Kevin quietly came up to use and whispered a “Great Job”.  It was cool to get this compliment unprovoked instead of having to stare at him with desperation in our eyes post show like we had originally planned.

After the show we walked the block to our cheap metered space and noticed we had a new message on Instagram.  It was a delightful group video of our friends at the ATL sketchfest informing us that we had been voted “Best of Fest” by the panel of judges and we had won this awesome prize!

It was the perfect end to a weekend of awesome.

The after party for Queen City was at a nearby hotel bar, we stopped in briefly and I’m sure we would have had a great time and seen some famous people had we struck around but we also knew there was a group of some of our favorite sketch comedians drunk some where in the city.  As for the rest of the evening I can only say, if you get the chance to drink with Robot Johnson, you should do it.  If you’re in the Charlotte area their next show is at the Evening Muse on December 7th you should get tickets now before they sell out. 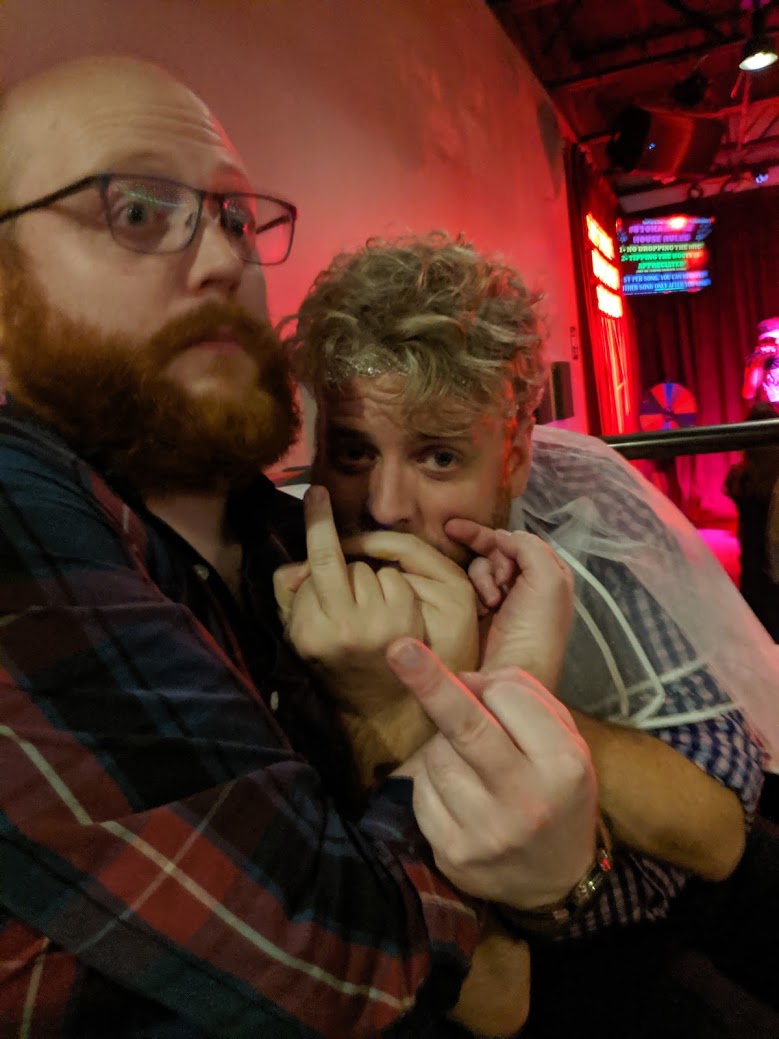 (some photos stolen from Candice)

And if you enjoyed reading about us having fun so much you want to give us money, you can do so here tiptonight.com/unstoppablefailure