Everyday life often feels dull after attending a comedy festival. If you had fun at the comedy festival, then it feels extra dull. The days after our late September adventure in which we hit both the Inaugural Atlanta Sketchfest and the Queen City Comedy experience have felt like a steaming bowl of shit. Which is to say, we had an amazing time. 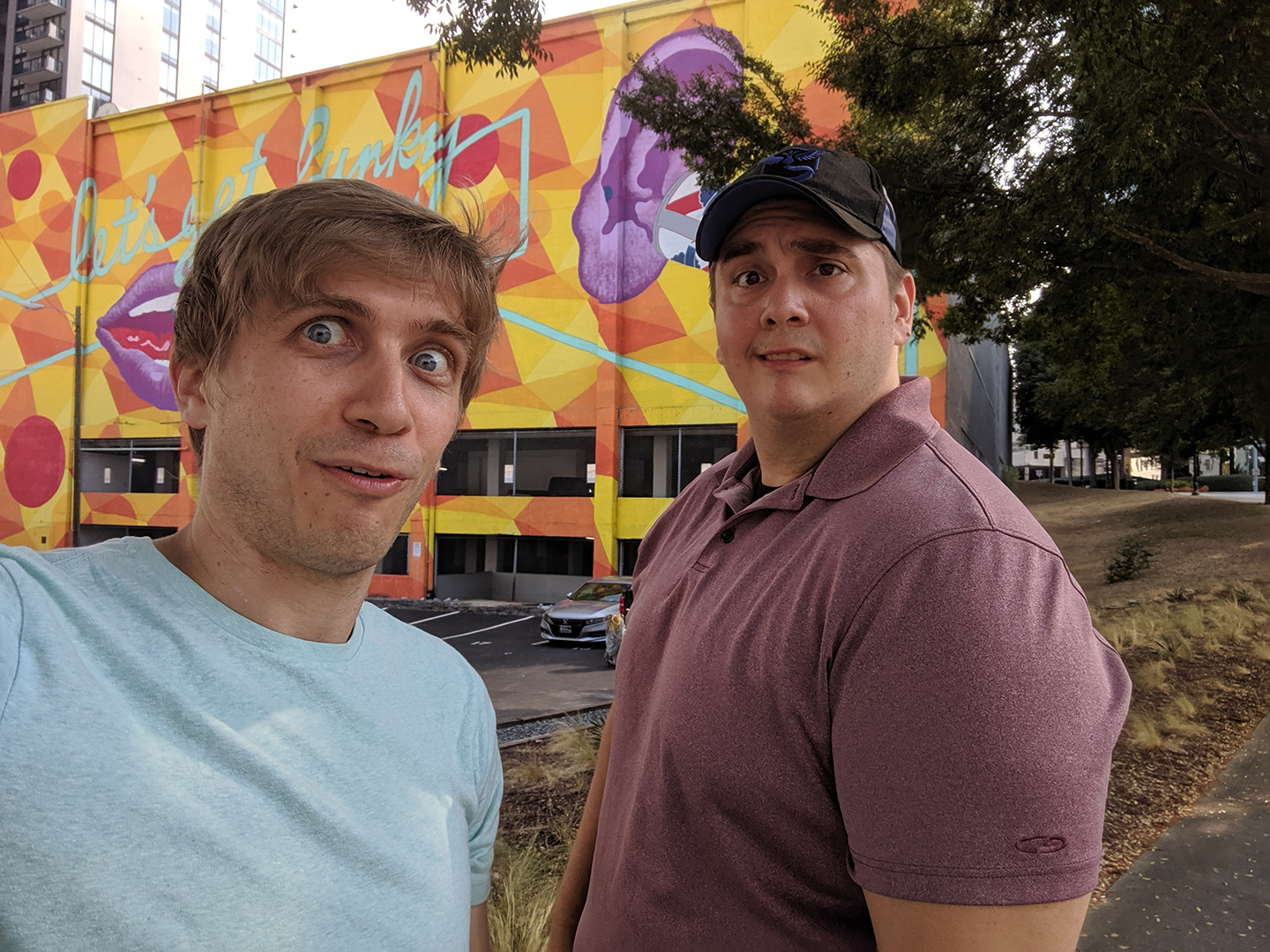 Trying to hit two festivals in one weekend has some drawbacks. First off, you can’t spend that much time at either fest. Secondly, it means you’re getting a lot of emails at the same time.  Both Atlanta Sketchfest and The Queen City Comedy experience do a great job of reaching out to performers ahead of time to let them know about various events, tech requirements, etc.  A responsible person would respond to these emails immediately and not have a panic attack….this is not how I reacted.  Instead, I decided to respond sparingly and just throw a bunch of shit in my car and run as much of our own tech so I’d feel like less of an asshole.   Also performing in two fest outside of the city in which we lived results in a lot of driving.  Both Al and I were running a little low on PTO at our respective day jobs and so we were only able to take a half day the night of our 1st show.  This would allow us to get to our Friday show in Atlanta right around rush hour!  If you’re familiar with Atlanta traffic then you know this was the best idea we’ve ever had….we arrived at the Theater later than we had originally hoped.

The theater itself, “PULP”, was a very interesting space. A small bookshop up front concealed a sizeable stage in back.  A door stage right is where most people entered from and there were openings to the backstage area on either side.  There wasn’t really a wing hiding area and we were pretty proud of ourselves for bringing a pop-up change screen so that we wouldn’t have to modify our set, or so we thought! (Dramatic sting music)

Whilst unpacking the theater owner informed us that no liquid was allowed on stage because he didn’t want anything that could damage his very expensive projection screen, this would not be the last time we would hear about how expensive the screen is. Being the bad boys of sketch comedy that we are, we almost always have at least on sketch where we’re drinking on stage so it meant we once again were going to need to modify our set.  I should point out this is more than likely no one’s fault but our own as there’s a good chance this was communicated in one of the emails I didn’t keep up with, but it did mean our sketch featuring 40-50 spit takes had to go!

Here’s a little diagram of the stage setup just in case you ever find yourself performing here, which I think is unlikely considering how hard we BROUGHT THE HOUSE DOWN!…but seriously I think the theater might have closed shortly after our performance due to financial concerns, which is a shame cause it was a great space. 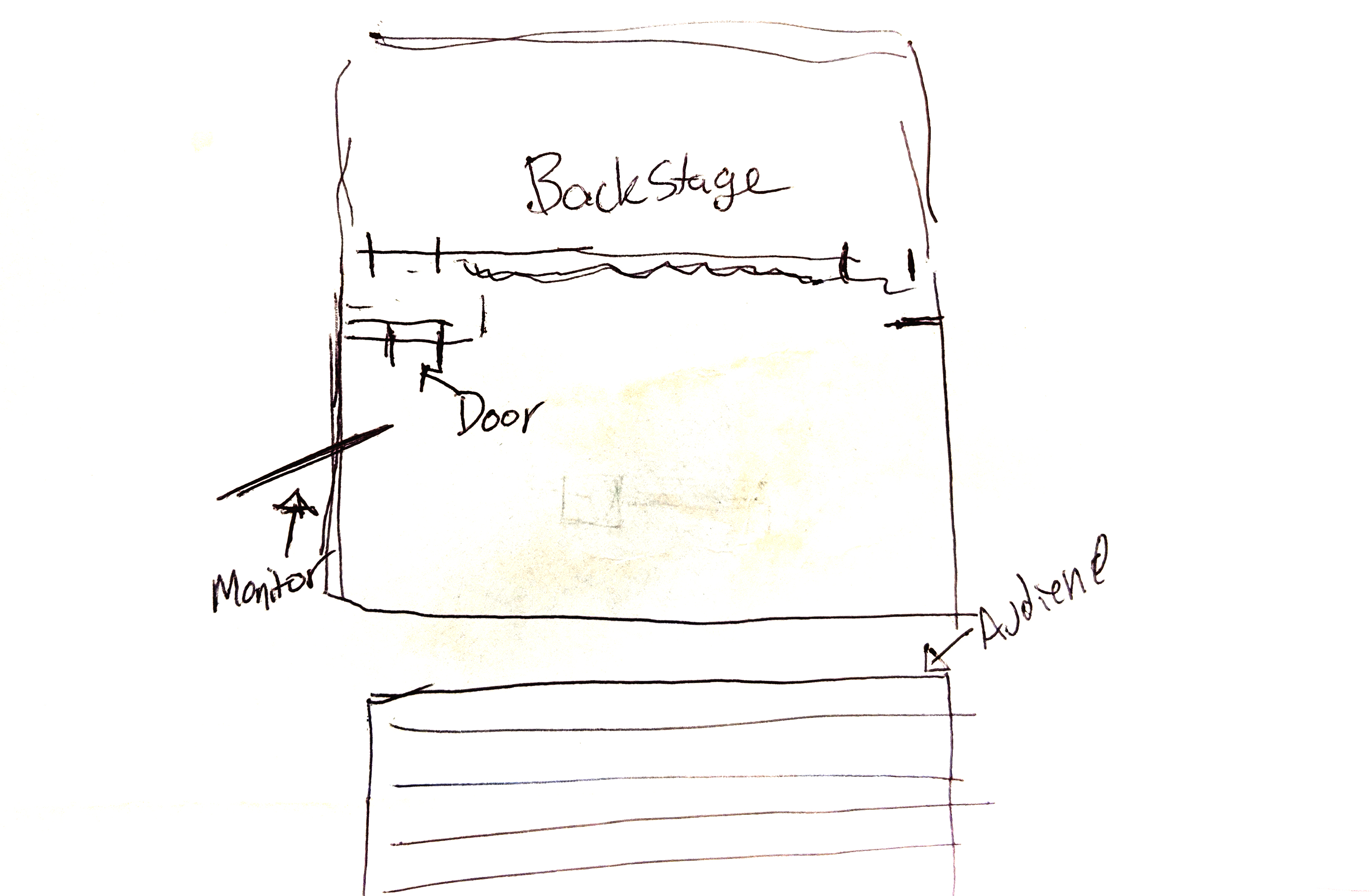 I love general comedy festivals that let you see a variety of different comedy forms, but I have a special love in my heart for Sketchfests.  This skechfest was organized by the group Sketchworks. I’ve been lucky enough to run into these guys at a few festivals previously. They’re a delightful group of funny chuckleheads who really care about the art forms of parody and sketch comedy.  Originally they were supposed to perform in the fest as well but I think they’re plates are pretty full due to the litigation they’re currently dealing with between them and the creator of GREASE, because that’s a thing that happens to people (You can read more about that here).  So instead of performing they decided to focus on their organizing and hosting duties.

This was the first Atlanta sketchfest and they went all out.  We were greeted with little swag bags upon our arrival filled with candy, coupons, and a very nice travel mug perfect for inconspicuously holding the type of liquid we weren’t allowed to bring on stage. Even though there was only one show per night they jammed a lot in. Each of the 3 nights featured 3 groups and 6 or so video shorts in each performance.  And since I’m talking about how much content they packed into the shows I’ll go ahead and drop in my only major criticism of the fest which is the show was looooooooooong. Then again, it was the first one and they’ve already told me they plan to keep things much tighter in the future. Other than that though things went off without a hitch, Brain did an awesome job managing tech and despite the show’s Lord of the Rings like run-time the audience they brought in was engaged the whole time and the hosts (Jillian and Julie) of the evening did a good job making sure the energy stayed up. 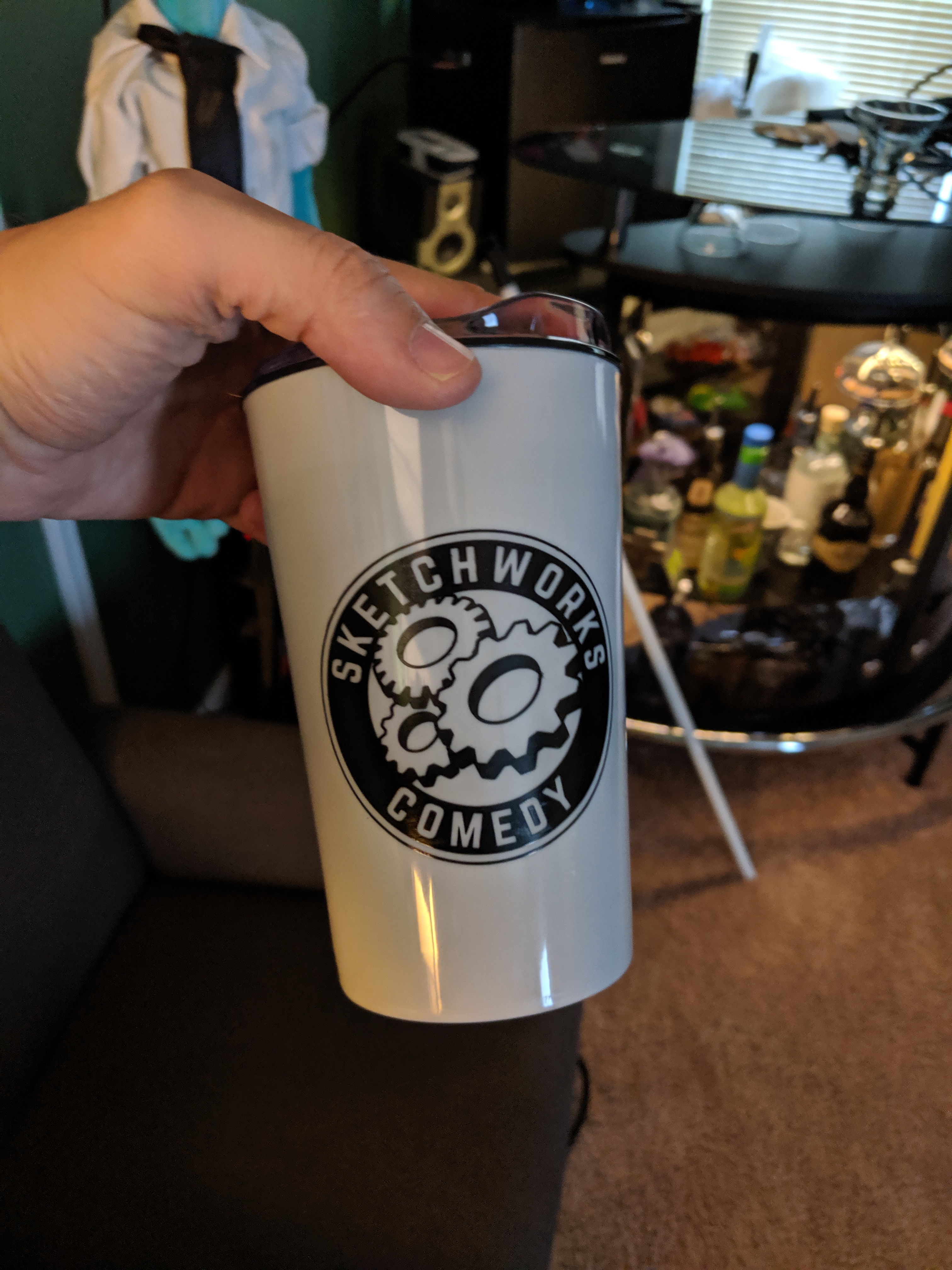 We always try and watch the groups after us in a set, but we often don’t catch the ones before us because of nerves and whatnot.  However, since we were going last, and we only here for the night we decided to catch the first act and then begin our nervous pacing during the 2nd group.  This meant we got to see “More than Cousins” but unfortunately missed out on “Moon Police”. Luckily both groups shared a couple writers and performers, so we got to get a sense of their overall style.  More than Cousins kicked the show off right.  Their sketches often steered towards the zeitgeisty and their writing utilized the voices of their diverse cast while still feeling cohesive. Everyone in the show was great performer, and I’d like to give an extra shout out to Frank Amoroso who performed with both More than Cousins and Moon Police and is responsible for my favorite Blink 182 impression I’ve seen to date. (and I can never see too many) Frank is the exact sort of guy you want to meet at a fest. He loves sketch comedy and even thought this particular fest had a competition element he is earnestly interested in seeing and routing for the other groups, he made us feel welcome right off the bat.

We also got to see a few shorts and particularly enjoyed “The Cops” by Respectful Productions and “Screaming at Insects” by our friends at High Dramma. 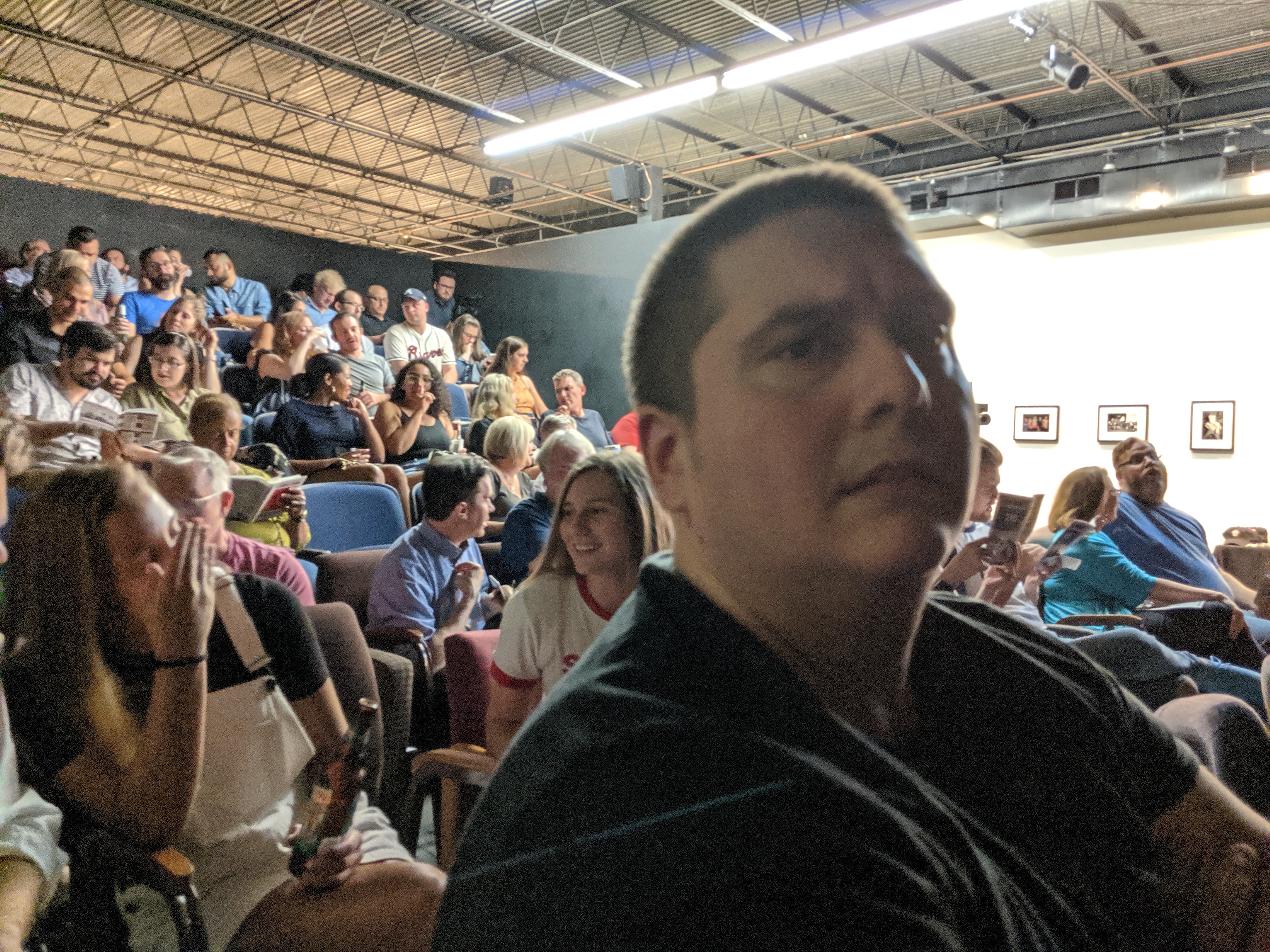 Up next was Moon Police who I wish we were cool enough to watch, but from what we were able to tell from backstage their set went very well and they’re also skilled at homing in on some of the absurdities of modern life. Then it was our turn, we drank some empty beers and felt like frauds while doing it, but other than that the set went great.  Afterwards we went to a nearby bar for the after party, which was exactly what I wanted it to be.  The place wasn’t super slammed which meant it was quite enough to nerd out talking about sketch comedy.  We met Jim Hodgson and Jason Velazquez who’s group The Scene Shop was performing the next night and after talking to them, I’m extra disappointed we didn’t get to stay and see their set. They’re obviously people who love to get into the nitty gritty of comedy writing and over think things as much as we do.

We then navigated the nonsensical Atlanta streets (Extra shout out to More than cousins’ city planning sketch which we did not fully appreciate before driving a mile and a half in this city)back to our hotel because we had to head to Charlotte for the Queen City Comedy fest the next day, where we would be opening for the workshop showcase of one of our sketch comedy heroes.  TUNE IN NEXT WEEK TO SEE IF WE EMBARRASSED OURSELVES and an exciting climax to the Atlanta adventure. !