This past weekend (9/8/19) we were part of the 8th Annual Norfolk Comedy festival in Norfolk Virginia.  In years prior this was an invitation only festival, which means they didn’t accept submissions from the general public and programmed the fest by only seeking out people they knew their audience should be exposed too.  Past alumni of the fest include Kevin Allison of the state and the well-known NYC musical duo the Reformed whores.  This year the big names drawing people in were Amber Nash of Archer fame, and Terry O’Quinn of Lost.  They also opened submissions for a few slots to the general public and we were lucky enough to weasel our way in. Suckers. 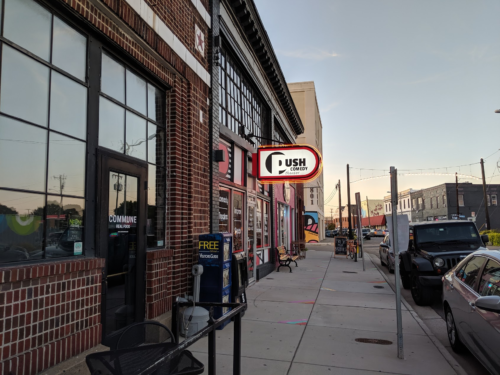 The festival is produced by the Push Comedy theater and the theater’s name saints “The Pushers”.  Prior to the fest Sean of the Pushers did a great job of reaching out to see if we had any tech needs, and to let us know about cheap hotels in the area.  If you’ve performed at comedy festivals that aren’t specifically SKETCH comedy festivals you know it can be a little bit of a crap shoot when it comes to tech, but even though the festival seemed to be primarily improv focused The Pushers got their start as a sketch group and are great about helping with the technical requirements of a sketch show.   Our tech, Adam was super helpful and knowledgeable, but we’re still micromanaging assholes, so we decided to run our sound cues ourselves and brought our own speaker that filled the space pretty well.

It’s always a good idea to get an idea of the stage layout before arriving at the fest. In this case, it was a good idea that we failed to have. We planned our set with two sketches that involve me running on stage from the side wings based on a visual cue. We forgot that not all spaces have side wings, and the primary entrance to this stage was a center door that leads directly into the green room. Luckily, they gave us ample tech time, and we were able to figure out how to modify. If you’re ever lucky enough to perform in this space here’s a basic layout of how the stage is set up. 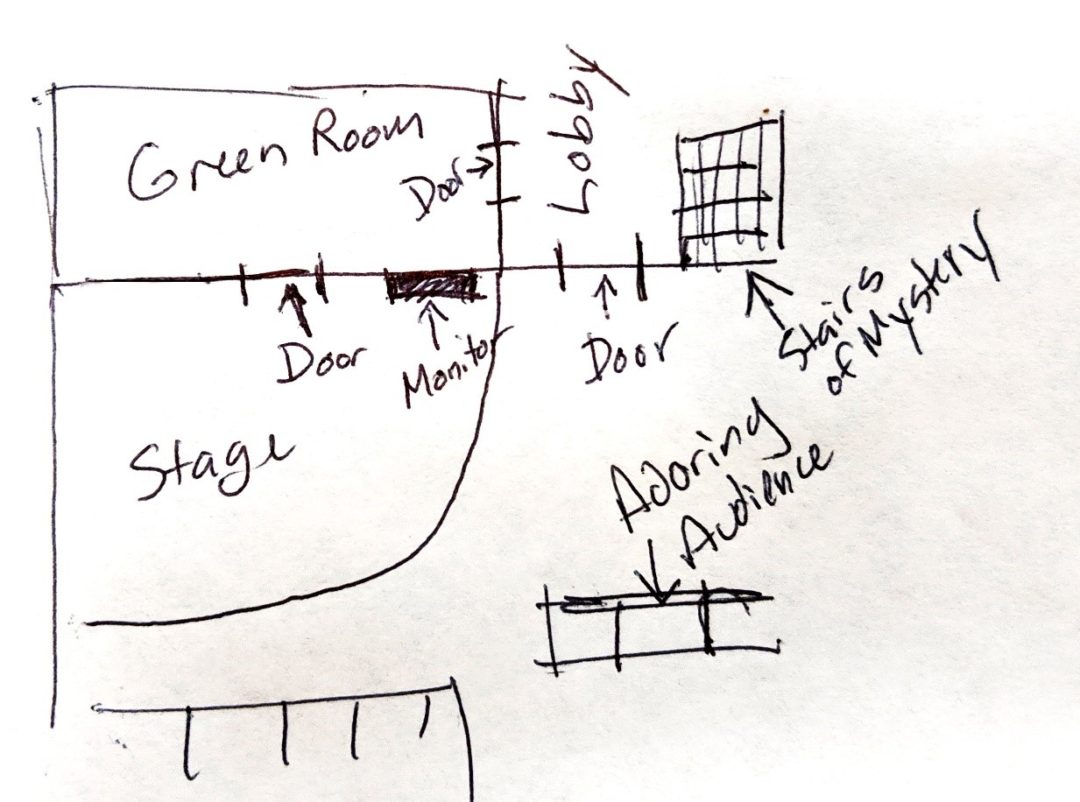 Our schedules, unfortunately, only allowed us to stay at the fest for one night. That meant, we really only got to see the show right before ours which featured the improv group “The Sweater Puppies” and the “East Coast Comedy Crew”.  Sweater Puppies are a hilarious duo out of Atlanta comprised of Amber Nash and Whittney Millsap.  The scenes they create are inspired by clothing items donated by the audience which are then passed on to a charity after the show.  The chemistry between these two women was undeniable and the speed at which they get on the same page is one of those things that makes good improv feel magical to watch.  The 2nd set which featured the “East Coast Comedy Crew” once again saw Amber and Whittney on stage and they were joined by Kevin Gillese of Dad’s garage as well as the hosting Pushers.  The extra special treat of this performance was that all the scenes were inspired by the poetry of Tim Seibles, former Poet Laureate of Virginia.   This man was walking gravitas and his poetry was both fun and powerful.  Format wise, Tim presented a handful of poems up front and then the improvisers did their show.  I think I might have slightly preferred if the scenes and poems had alternated so I could have more easily remembered what aspect of the poems the performers were riffing on, but at the same time Tim’s readings were their own little magical pocket and breaking them up could have distracted from that.  Improv super teams of this nature often have a little awkwardness because people aren’t used to playing together and get worried about stepping on each other’s toes. However, in this instance you got a sense that this group trusted each other enough that even if they didn’t know what the other performer was thinking right away they were happy enough to see where it took them and go along for the ride. Everyone on stage was earnestly funny, and they did a great job of mining the material for some big laughs.

We were part of the 9 pm show so once the 7 o’clock show finished up we immediately headed to the green room so we could begin our normal preshow ritual of freaking the f out.  I would describe the greenroom as cozy.  It wasn’t a closet, like some I’ve encountered, but I’m sure it could start to feel cramped if you had two larger groups back there.  Being just a duo, we had plenty of space and the backstage couch was a good place to fester in our anxiety till the set before us finished up. 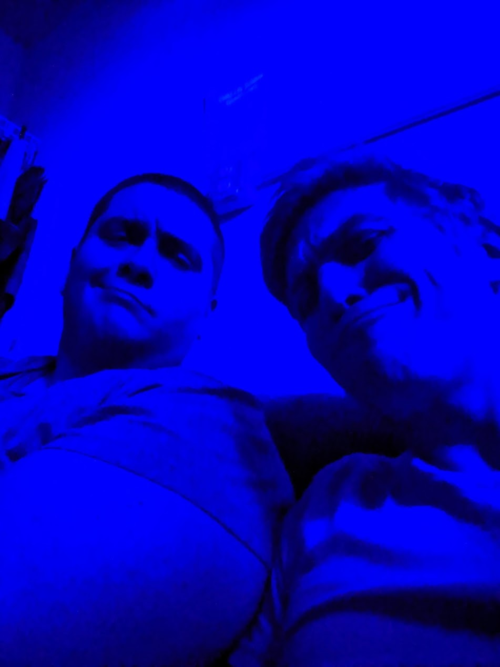 Speaking of the performer before us, we were happy to be sharing a slot with Andy Livengood. Since we were backstage, we unfortunately couldn’t see his show this time. Luckily we’ve run into him at other festivals and can vouch that he’s incredibly funny and also just a genuinely nice person.  His current one-man show, “Butcher Stories” features several the truly insane customer interactions he has on a regular basis at his day job as a butcher.  Even from backstage we got a sense of his impressive character work. Despite it being a 1 man show it didn’t feel like he was alone on stage.

Then it was our turn to perform. It’s difficult to review our own performance but it seemed well received and we had a lot of fun.  The Push theater has developed a fantastic community around it, and this always makes shows easier.  You got a sense that the audience here really loved comedy and come in looking to have a good time rather than challenging you to try and MAKE them enjoy themselves. 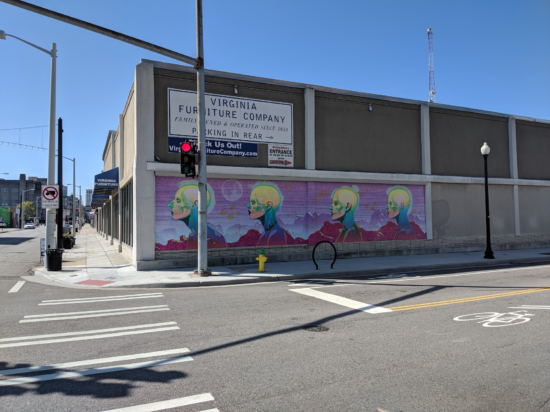 The Theater is in a cool neighborhood full of street art and restaurants and our hotel was only a five-minute walk away, so we dropped our props back at the room and headed to the after party.  The party was only a mile away at 80/20 burger bar.  80/20 was a sponsor of the fest but that’s not the only reason it was a great choice for the post show gathering.  First off, there wasn’t any overly loud music, so it was easy to have actual conversations with people.  It might make me sound like a curmudgeonly old man (it’s not like I got into to comedy to NOT gripe about things) but more parties need quite spaces.  Also, all most everyone at the restaurant seemed to be involved with the festival or the Theater in some way, which again made interactions way easier since everyone had something to talk about. Plus! They served alcohol, late night food, AND the staff didn’t seem annoyed that we were there!?!! This after party had everything that I personally look for in a post-show hangout.

So, even though we had a great time is there anything we wish had been different? While we had an amazing time on stage and the festival did a great job getting a receptive audience in to watch we did find the order of our show a little bit odd.  We were doing a 30-minute sketch set and Andy was performing an hour-long play so it felt kind of strange to have us perform 2nd.  This is really a minor complaint though as we still had a fantastic crowd, and at the end of the day that’s what matters.  Also, if you find yourself lucky enough to be a part of this fest in the future be aware that since this fest was previously exclusively organized by the theater team inviting their funny friends, and it is such a great community at Push that you might feel a little bit like an outsider when you first arrive. Even a good deal of the other out of town performers seem to know each other already, but everyone is incredibly friendly and once you rock it onstage, you’ll have plenty to talk about.  All in all, the Norfolk fest was a great experience run by some incredibly funny people and we’d love to come back in the future.