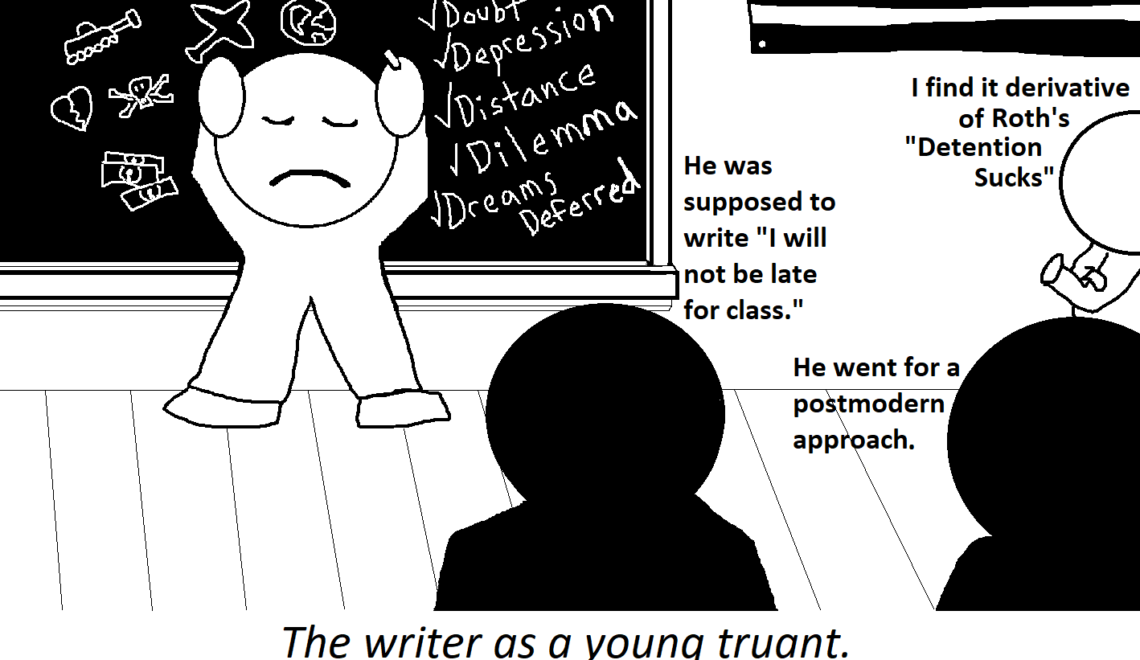 Space. The final frontier. Also the first frontier – also the only place to go always. Move your sweet round buttcheek an inch and you are moving that sweet round buttcheek an inch through the infinitude of space. We are all of us floating in space on this big blue buttcheek – although it’s more like a whole butt, I guess, or a ball – and our planet Earth is really just a tiny little butt-or-ball in comparison to a whole lot of the other much bigger butt-balls that are floating out there in the vastness. Then, every night, when we spin away from one of those much bigger butt-balls – the one we call our sun – we are confronted with an even more belittling cosmic comparison: we see there are not really so many places to place a butt out there in our emptiness-dominant existence. Admittedly, there are more star-balls than anybody can count – but is what is truly overpowering is the endless, flat-ass darkness – the space of space between the stuff – the vast velvet of our universe’s disporportioned billiard table. Nothing we shape here on our minuscule moldy planet has any importance or relevance. What kind of massive balls then does it take to create something weird and new anyways and to push it forth into this cold, unforgiving void? What steely butts does it take to witness?

In the microcosm of sketch comedy, the point of genesis for a new, observable celestial body, i.e. a sketch, is a cold reading. Heretofore, the sketch has existed merely as a potentiality touched only by its creator god, i.e. the sketch’s writer. At the time of a cold read, the sketch writer casts his or her work out of their personal edenic bubble into the harsh ether, into a chaotic nebula composed of their troupe members’ snap opinions, weird acting choices, and borderline illiteracy. What spectacular supernovas and terrifying blackholes should a cosmically courageous sketch comedia-naut expect to encounter out here? A few magnitudes to measure: 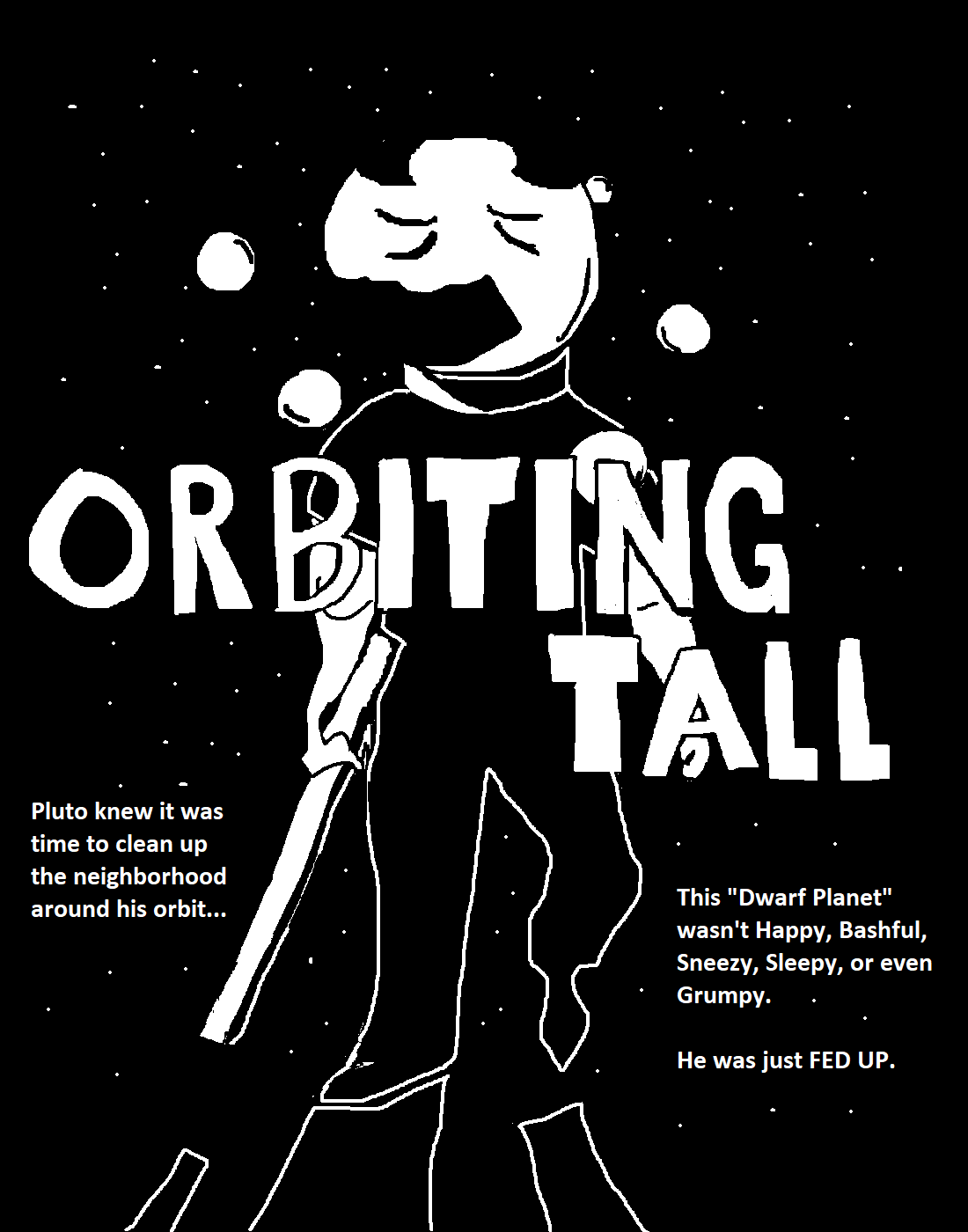 First off, one must think of the vehicle by which they deliver their sketch to the troupe. Shall you pass around your scribble-laden notebook, deliver each member a hand-inscribed scroll, or chisel each and every line into the trunks of trees set upon divergent paths in a yellow wood? Traditionally, printed hardcopies of the sketch work pretty well, but there’s a bunch of little dramatic dilemmas here as well. One, you gotta procure some of that precious substance known as paper, which seems almost barbaric and environmentally negligent nowindays, practically nihilistic. Then there’s the eternal struggle between the tribe of folks who prefer stapled sketches vs. the tribe who prefer paper clips. I have heard that it’s best to use paperclips for scripts in general, or some other easily altered organizational machination such as binders (Binders for every sketch?! Sure, then I’ll fly home in my diamond studded dirigible and crash land it into my pond of ambergris!) so that pages can be replaced as the script develops, but this does strike me as a little much for a cold reading. I say don’t go for hard copies at all, especially at this early stage. Just ask everybody to pull up your shit on their smart phones or tablets. Actual scripts are nice, sure, but it’s the twenty-first century and as a people, we need to start being honest with ourselves: we don’t deserve nice things. 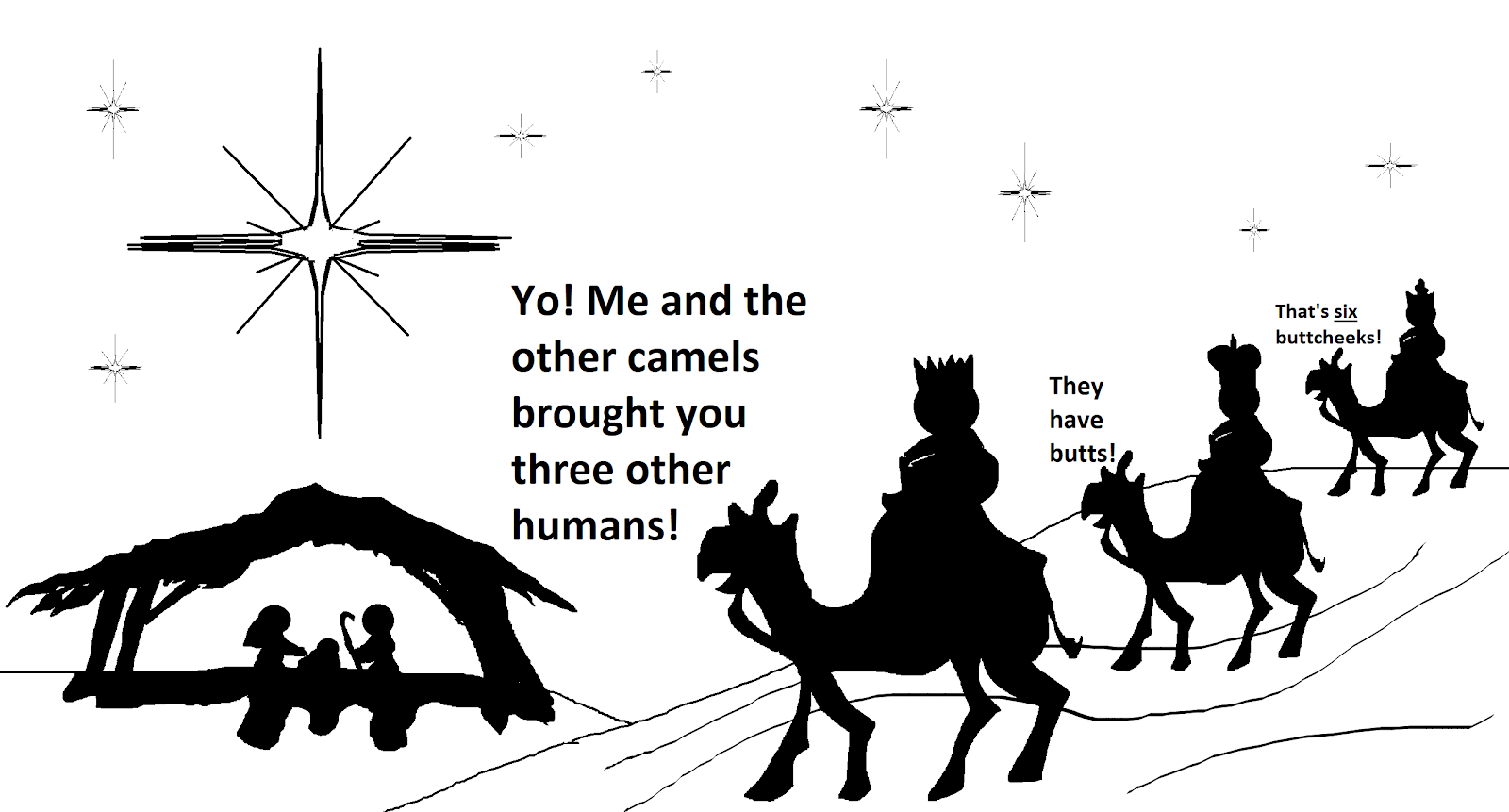 Once everyone finally has access to the sketch via the scarred flesh of our rapidly-dying Mother Gaia or the wonders of technology. (If pulling up via smartphones, you’ll have to anticipate a brief colloquy for your readers to ask the host of that particular meeting what their wifi and their password are, then wait while it’s figured out that everyone already has these credentials saved on their devices from the previous meeting) then here comes the role assignments. Picking which one of your troupe members reads which character is vitally important to the vibrancy of the imminent reading and, indeed, to the entire destiny of the sketch. Due to the inate laziness of all energy-expending lifeforms, whoever is cast at this stage is likely to remain in their role all the way up until showtime (this is not to say that you won’t change it, and it is definitely not to say that trying various actors out in various roles is not a good idea – it is – just that changing things in general is hard and that the law of “leave well enough alone” called “inertia” amongst science-y types is a real-ass, deserves-to-be-acknowledged principle of physics) This becomes even more true the longer that the troupe performs together and the more that everybody learns what everyone else is entertaining or intensely irritating whilst portraying. In fact, if the writer doesn’t have a fairly solid idea about who should be what in their sketch, it might be a good indicator that the sketch isn’t quite right for that troupe just yet and it could use a little re-writing to contour to the idiosyncracies of the idiots in question. Quite a bit of this will happen in the rehearsal phase of the sketch. For now, just don’t give out a role you don’t want salmagundied to someone who’s going to salmagundi it. This translates to don’t be afraid to cast yourself in the role you want to play. You’re only hurting a matey by strapping them up with such an albatross, as their rendition, sans as it is of context or precogitation, will be sure to disappoint you. Their navigation of the cold reading will then leave you feeling as if you’ve been keelboarded under a barnacled brigatine. I, for example, have recently been taken by the idea of playing an 18th century mariner, so if I pen such a role, I should sloop it up myself.

While the cold reading is commencing, the writer should note when people laugh. These tend to be the good parts. The troupe should consider keeping them; however, caution must be taken that no part of the sketch is clung to, no matter how uproarious the initial regalement it receives; in fact, there may come a day – it may come soon – when the best laughs at any given cold reading must be abrogated as cancerous tumors. A sketch at this early stage is tectonically active. It perforce be if one hopes to craft the luscious, awesome grandeur of a rock solid bit. Certain nooks and crooks of the script must be sublimated, molten into the subterranean inferno in order to form the highest, loftiest peaks of art and humor. You’re not really sure what parts are – or will be – the most important. You might not have a crystal clear premise. Your escalations might be out of order. Your games might not be fun enough to make the audience happy they didn’t just stay home that night and play Scattergories. You might not have thought of anything funny to say in certain spots. 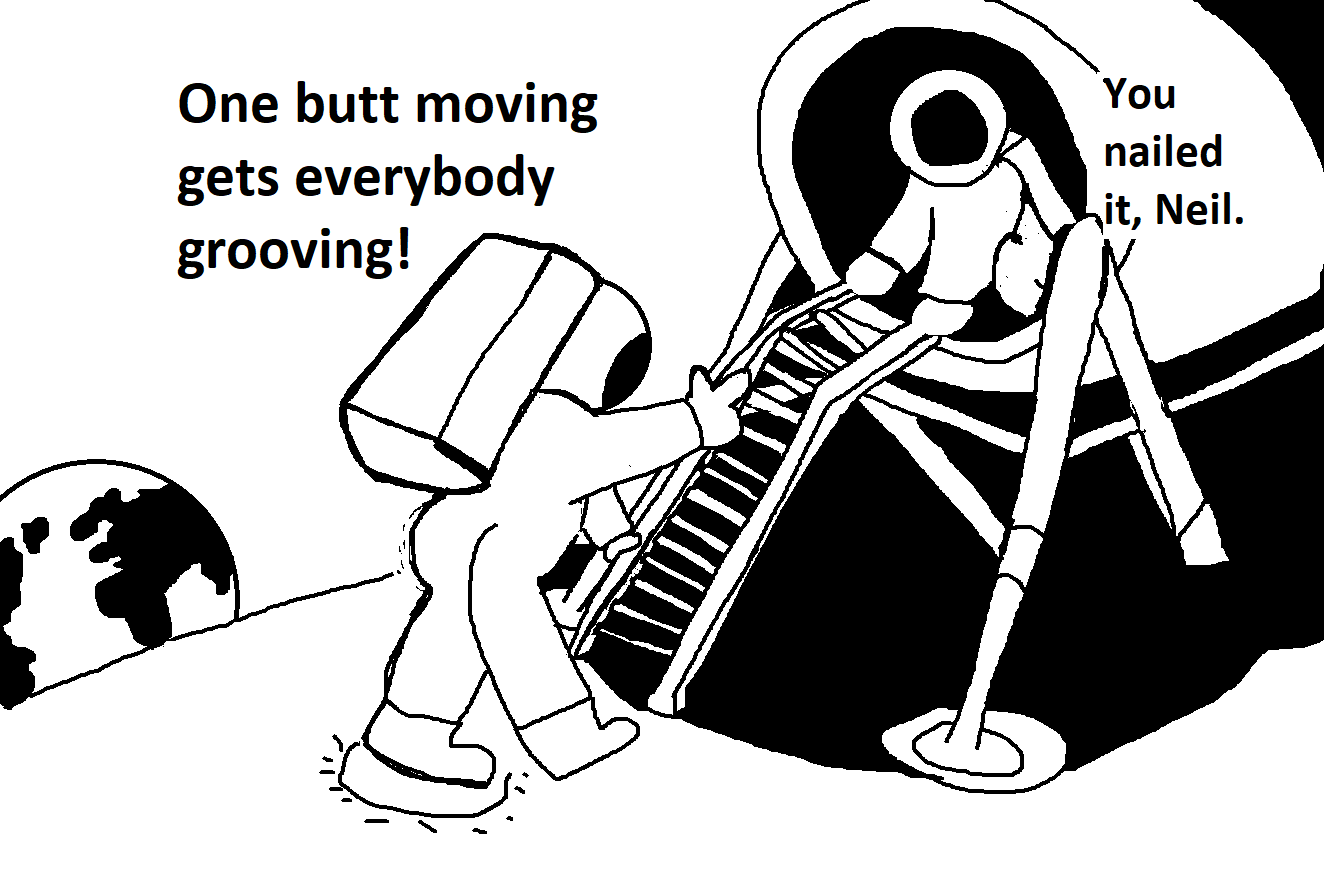 The actors, for their part, just need to focus on reading the friggin’ thing. At a cold reading, no one has any idea what they’re about to say, so the actors must be on their toes for misspellings, transpositions, and realizations half-way through that this would have been better read with a British accent. As an actor at a cold read, you will trip over words, emphasize clauses that shouldn’t have been emphasized, and haphazardly let the air out of the plumpest parts of the sketch via your nettlesome human frailty while the sketch’s writer fumes at you with a cloud of eye daggers. The secret to conquering cold readings as an actor is the same as conquering much else in life: confidence!  Go fast. Go big. And then go home. There’s a tendency to try to be respectful towards your friend’s new script because of what the meaning of friendship is and so forth, but this tendency is paradoxically your enemy when it comes to producing a sense of what a scene will eventually feel like on the stage. By showtime, after you’ve rehearsed the sketch over and over, you won’t be precious with the wording and you’ll be trying to hit each moment with alacrity and intensity; also you won’t really be able to skip back and re-do your mis-speaks. The writer has already heard these words in their head multiple times so they’ll probably thank you for barreling through – it will actually be closer to the version of the scene they’ve been hearing in that rusty silo termed a writer’s skull.

This is the ultimate purpose of a cold reading: to provide some sense of what the sketch will be like when it’s fully produced. This will let the troupe decide if they should spend any more time and resources terraforming it into an honestly viable project. Comedy sketches, of course, don’t take quite as much butt-sweat to build as fully habitable ecosystems, but when you consider the attention span and the mental stability of an average creative-type, the time-space between cold readings and shows can be geologic. Some bits in a cold read might be the best delivered they’ll ever be, simply due to the spontaneity and the surprise involved. Both writers and actors must keep that in mind. When you present the sketch to your audience, it will likewise be for the audience the first time, and you don’t want to scrap potentially great bits just because you’ve personally rehashed them a thousand times over. Therefore, forget everything I said earlier about being willing to lose the initial best parts – cling to them. Cling to them like they are the last espace pods off of the spaceship Titantic (which humanity will one day build and crash into the Sun).

Or don’t and do listen to what I said before. Cold readings are butt-balls of infinite possibility. For any and all approaches, there’s plenty of space.