How to Memorize a Scene: An Explanation For Those Friends of Mine Who I am Forced to Suspect Nurture A Veiled Hatred Against Me

For most who step foot inside a theatrical space, they need but to memorize a single line: “How did you memorize all that?” This is what you say as an audience member when you have nothing much to mention to a performer post-show, but you are obligated to make a little lobby tete-a-tete because they are someone you care about, i.e. a “friend.” It’s also a good thing to say if the performer is someone you disdain, i.e. an “enemy”; although, if you’re the kind of person who attends your adversaries’ shows simply so that you can inject a comment into their self-esteem that is at once mild compliment and indeterminate slight, your time would have been better spent picking single pieces out of jigsaw puzzle sets. You, sir or madam, are an interpersonal enigma.

Memorization does refer to a process that requires a bit of effort and ability on the part of the performer. So it is, in a way, a nice thing to mention. However, if you’re a performer who’s perhaps overly circumspect (which you might have gathered that I myself, somewhat, am) hearing it can also be decimating. Although, that said, none of us can definitively judge the inner machinations of one another, every one of us being an entire universe of perceptions and expressions unto ourselves. So it is, ultimately, upon the listener to take any given appraisal that they receive in whatever light that they desire. So, in the spirit of a cordial reply to an inquiry which I am admittedly probably reading far too much into and that I here resolve to thus forth take as nothing but a breezy bon travail: “How did I memorize all that?” Here’s how, you sick bastard.

First, I scan the script of the scene. I gauge through mathematical scrutiny how many characters are within that scene. If there’s only exactly two there, I’ve lucked out. Duo sketches are easy as pie to memorize because you don’t have to put that much of your precious lifeforce into knowing your cues, i.e. some other jerk’s problems. You can surmise that when the other piehole that’s in the scene stops spilling out crumbs then it’s your time to shine, baby! On the other hand, in a scene with more than two entities, your golden moment could come virtually anywhere; you’re been thrown into as much chaos as a Circle from Flatland thrust into the Spaceland of the Sphere. 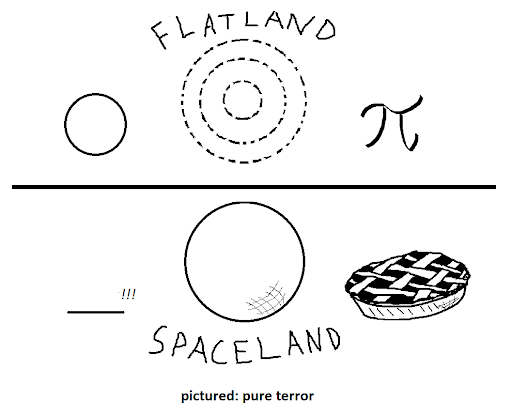 One character scenes are similarly way more difficult than two, memorization-wise. When trying to wrestle into submission (or into audition) a big ole’ monologue, you quickly learn to love and to ardently miss your old nemesis the cues. The human mind can only re-regurgitate so much dramatic detail at length before it needs another swallow of ruminate from our mama bird the sensory world. The longer a single line, the more challenging it’s going to be. Monologists are advised to break down their diatribes as if there is a phantom nearby with whom they must occasionally account lest the unseen spirit clobber them in a Boo from Super Mario fashion. 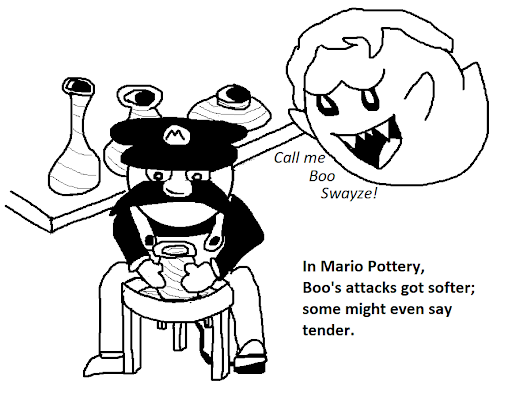 Normal people might recognize these discrete chunks that I’m referring to as complete thoughts or “sentences.” Applying thoughts to the words that you’re saying can be an effective memorization tactic – I tentatively recommend it – but it does have its pitfalls. For one, you must figure out whatever the hell the writer is talking about, which may require extensive research. Writers are a lot of high-falutin, all-over-the-place basket cases. For example, maybe the writer conjectured that the best way to get his thoughts across was to make allusions to Flatland and Super-Mario Brothers in a span of two paragraphs; it’s cool if you happen to have read that specific Victorian-era novella recently or played that video game franchise (one may be more likely than the other – I hear Edwin Abbott is wildly popular with kids), but if not, you’re gonna be spending a couple moments on Wikipedia. Also, once you do finally nail the meaning of whatever your wordsmith was hammering out – it was almost definitely strange and maybe didn’t have much payoff.

This brings me to one of the things I love about doing original sketch comedy as opposed to acting in plays or in anything where I’m doing material by someone who I can’t stare at in the eyeballs, ojo a ojo. (It also brings me to a long paragraph that’s slightly discursive wherein I recklessly impugn a couple of theatrical icons.) I prefer it when I can have a personal conversation with the writer of any given script and question why they wrote it that way or when I can berate them into changing it, damn it! It makes me feel more at one with the memorization process; indeed, with the performance as a whole. When in the big picture the script is more flexible, all that I must absolutely remember is the meaning behind the lines; the exact diction I can fudge a bit. In this way, it feels less like I’m balancing a glass menagerie of somebody else’s delicate animal figurines and more like I’m blowing the figurines into existence myself right before the audience’s faces! Which is cool, right? This is a reference to when I was in The Glass Menagerie, which is one of many experiences that I’ve had wherein I’ve faced the lamentable fact that most folks in the dramatical arts do not agree with my paraphrasing-happy approach to line memorization whatsoever. They reckon that when you’re performing the works of the “great” playwrights, like ole’ Tennessee Willy or Willy Shakespeare or Willy Lohman creator Arty Farty Ashy Assy Milly Silly (Arthur Asher Miller – I went too far here) that you need to do it word for word. There’s plenty of good arguments for this: that you can’t get in touch to finagle something else with these guys cause of the limitations of distance, money, time, and mortality; that you’re presenting the people a classic in as pure a form as possible which is what those people are paying for; and that many of these playwrights were admittedly dictatorial bastards who came to believe they shat out gold that lowly actors or had no right to change regardless of circumstances and that you’re thus respecting those playwrights’ egomanical wishes. My counter arguments could be: that these plays were constantly changing lines while in the development of the initial productions, so being a little loosy goosy in your own production is more in keeping with the vibrant spirit of live theater; that one of the most important differences between seeing a play and reading a book is that the actors are making the scene immediate to the senses of the audience, and as artists in their own right who control the ultimate expression of the piece, actors should feel the agency to morph their lines to best intertwine with the constantly shifting and always unique present moment; and that, if a writer thinks his stuff is really all that great that it should be set into solid stone, screw him. (You saw what I did to Miller! I fear no dead playwright! Except for any of the ones that I think are dead but are in fact still alive; did you know Edward Albee only died in 2016? I hear he was a real hardass, too. Wait, let me check again…yep, 2016. I’m safe.) The best policy is probably in between: deep respect for the existing material mixed with confident spontaneity, yada, yada, yada.

So I guess, in truth, my ultimate answer to “how I memorized all that” is that I don’t. Or at least, I prefer not to – not with a precision with which anyone would be impressed. Also, sometimes I highlight my characters’ names in my scripts. That helps.