When a Bit Goes a Bit Dotty: A Flavor Spectrum of Excuses 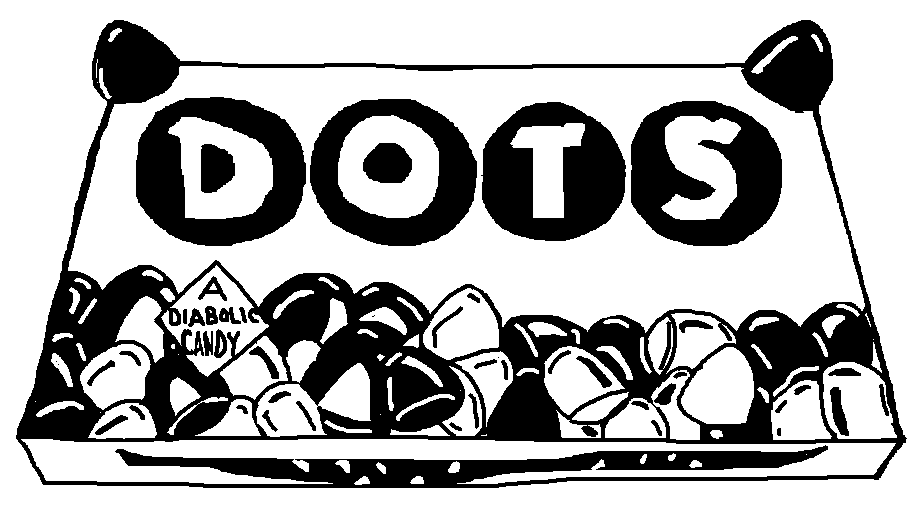 Dots are a brand of gumdrops produced by the Tootsie corporation of the Third Circle of Hell. They are crafted out of the putrefied pool formed from the collected congealed souls of the Gluttonous. They are vegan-friendly. They are my favorite thing. They make me sick because I love them. I am lovesick for Dots. Also, regular sick. Never, not once, have I resealed a box of Dots gumdrops, although the Tootsie corporation does provide a convenient tab on Dots gumdrops boxes to clearly indicate that the size sold is intended to be tackled in at least two periods of gummy consumption. I do not pay any heed to the clear indication of this tab. I will eat all of the Dots gumdrops immediately after I purchase the Dots gumdrops. All of them. Immediately. I will then proceed to feel wonky in my tumtum for the rest of the day and my teeth will hurt.

If I happen to have a sketch comedy show that night, I will move a half-second slower throughout that show, and my comedic timing will suffer. This is the most likely reason that I wasn’t that great last show. I chose to buy a box of Dots that day and the gumdrops of fate fell all too foreseeably in their iron-clad manner. There are other possible reasons that my sketch comedy mojo may have faltered, each of which I will connect to a different flavor of Dots. 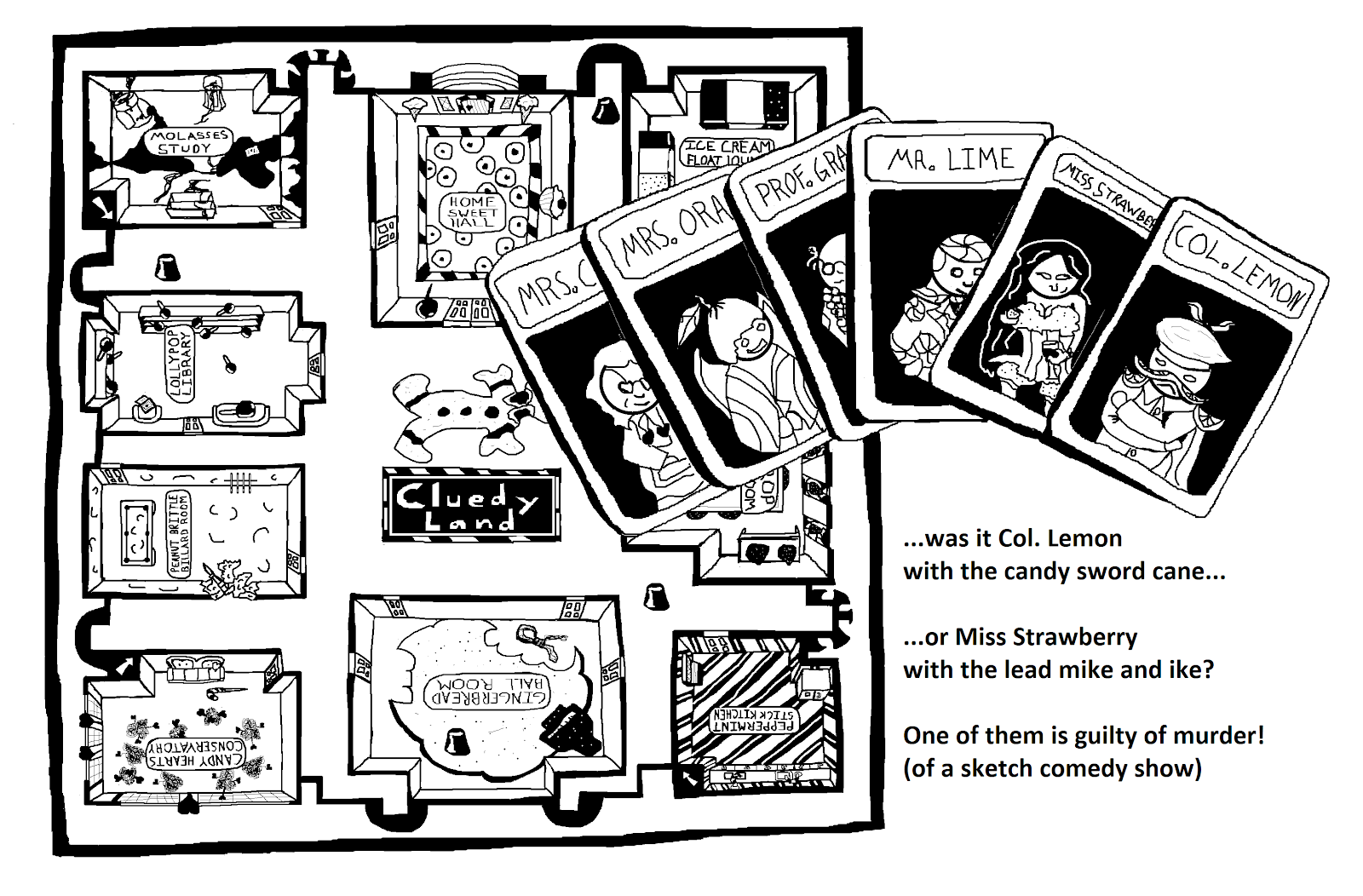 Perhaps I was Orange that night as in inorganically-arranged. Like a dried out turkey, I lingered too long in the radiation of my hot-take sketches until the skin of my line deliveries passed the pleasant tan coloration of spontaneous delivery and came out appearing an over-rehearsed Oompa-Loompian shade. This is to say that I delivered my lines way too much like they were lines and not as if they were merely, you know, whatevs my character felt like saying. I probably had a weird vocal pattern to every line, not unlike I was calling out Bingo numbers, leaving a gratuitous pause before speaking every time just in case a howl of exaltation went up from the assemblage. 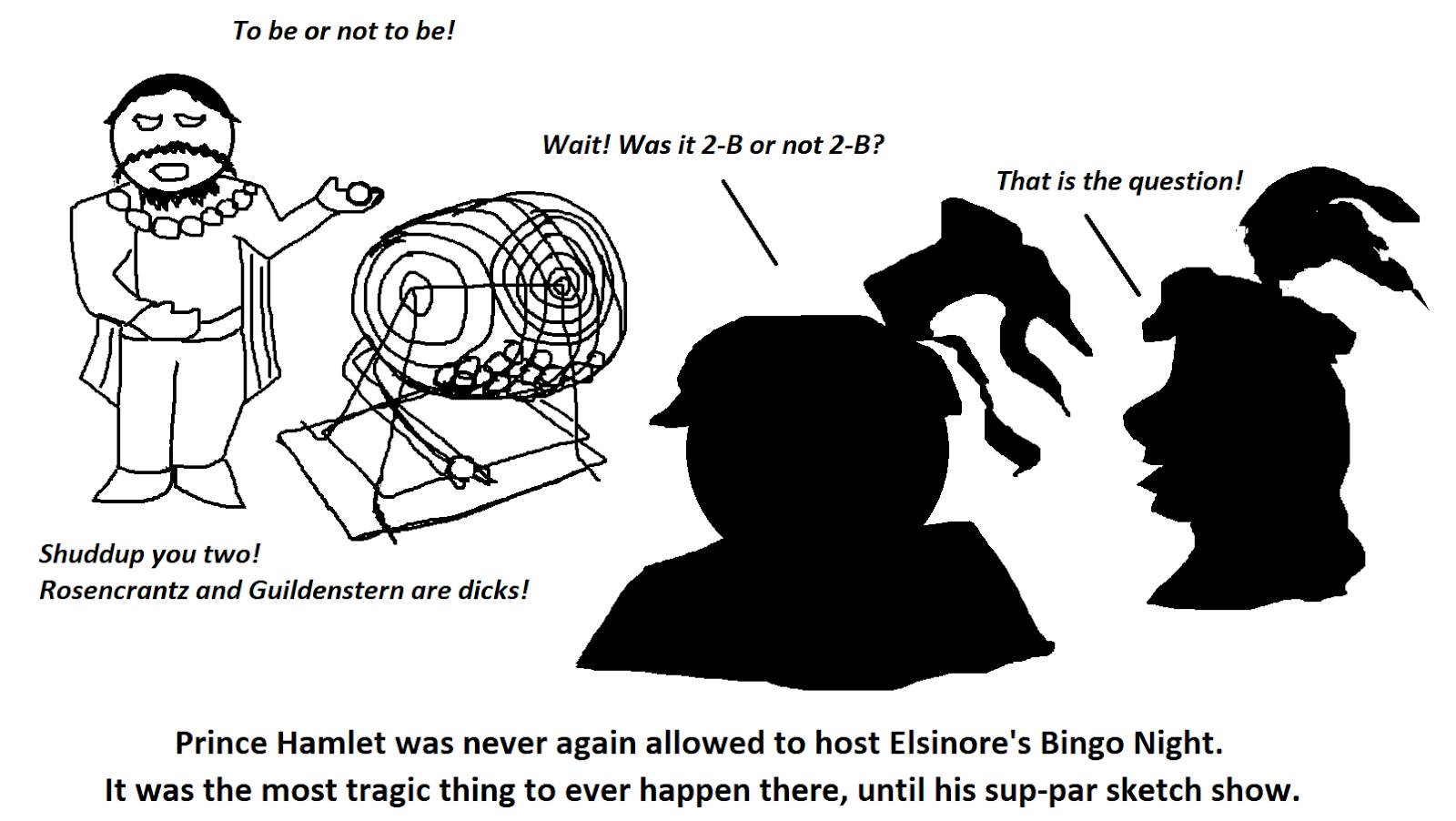 I failed to mask the artifice inherent in a theatrical performance. I was myself, the actor and not Not Myself, which is, of course, what I long oh so desperately to be. I was in my head about it. I have noticed that there’s two major recurring, more specific preoccupations that I tend to get up to in that head of mine – two cognitive flavors, if you will.  The first is Lime.

Lime references the “limelight” as in the quicklime-using lighting sources that once illuminated theaters, as in a synecdoche for the performing arts, as in FAME! I WANNA LIVE FOREVER! ALL YOU SONS OF BITCHES BETTER REMEMBER MY NAME! While on stage I was in pre-stage mode, focused on how badly I wanted the performance to go well rather than performing (per Yoda: “Do or not do. There is no try”.) In such a state, I would have only been in the context of the scene if it had happened to be a scene about an actor stiltifying their performance. There are many, many such scenes about bad acting in the history of acting because thespians are by and large a mob of navel-gazing scoundrels, but meta-awareness only gets you so far.

Actors are Olympians when it comes to the sport of spelunking up our own asses. We are rivaled in this regard only by writers. Both groups to which I belong have a tendency to shoot ourselves in the feet just because we were staring at our collective, blurring metatarsals for so long that they merely felt like the natural targets.

Most sketch comedians have a hand in writing their own material, so they get self-doubt swelling from both below and above. We’re not merely fearing how well we may or not act, we’re also fearing if the lines that we’ve written are any good no matter how we wind up delivering them.

It might be that Myself, the Writer had set Myself, the Actor up for failure before the performance even began. If I was failing hard on stage last show, it might have been because I was still considering if I should have cut approximately every other line that was spoken. I might have accidentally on purpose skipped over a couple of things, or conversely, I might have promiscuously ad libbed – all with little regard for my scene partners, the audience, or simple common sense.

I call this predicament the Strawberry because strawberries are an aggregate fruit and this concern addresses the tendency of aggregate writer/actors to keep the “writer hat” on long since the hour has passed to hang that haggard hunk of haberdashery on its hook. 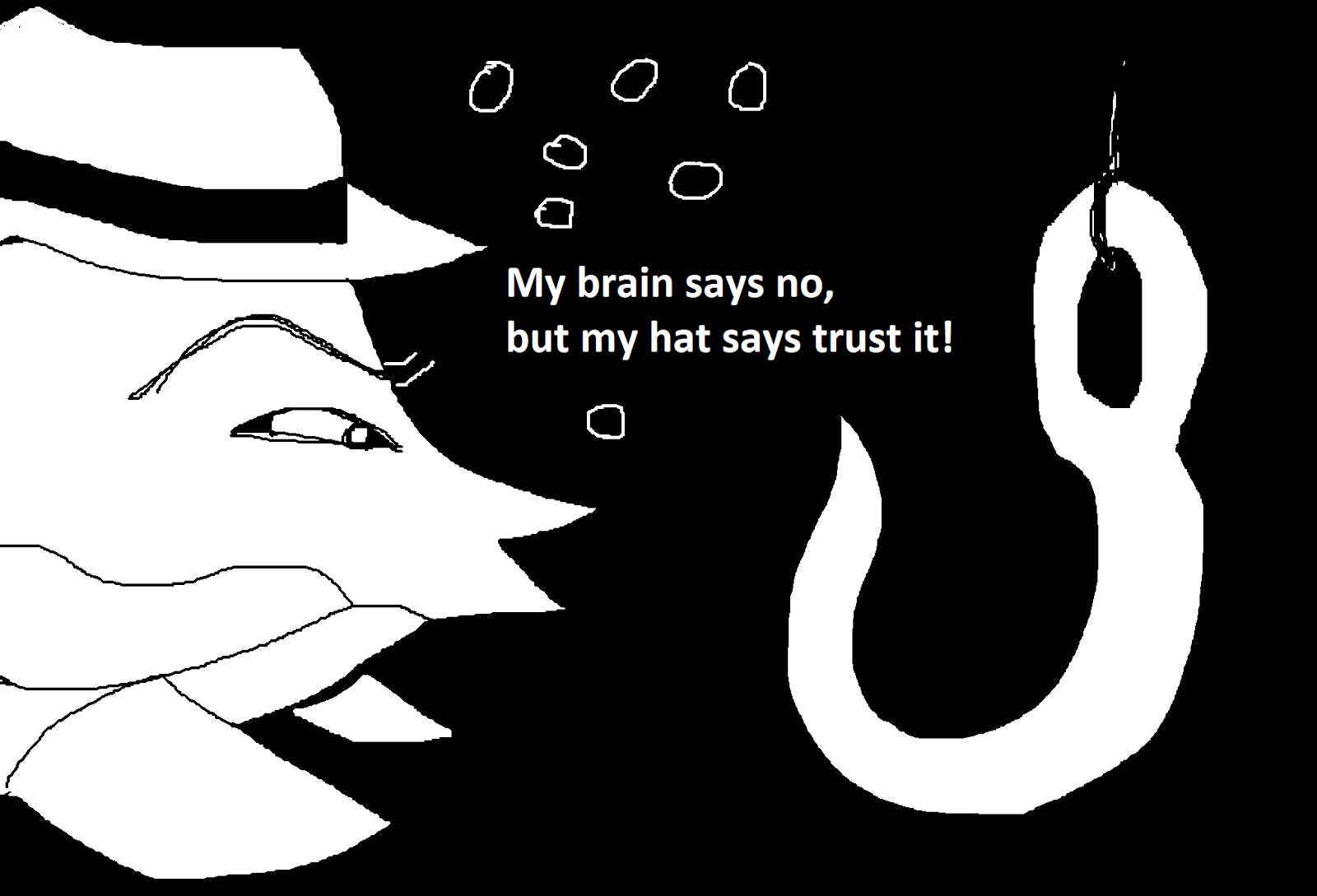 Then again: maybe I was in the moment, maybe my timing was fine, maybe the sketch was good, and maybe the scene outside the scene was awful. The spectators were too drunk or not drunk enough (live comedy does tend to go best with at least a little alcohol), or they were more concerned with the buffet being served at the same time (no one can compete for attention with a buffet), or things got political between us in a polemical fashion. Sometimes, life serves you a Lemon of a situation. There is nothing that can be done with a lemon, except to squirt its acidic juice all over the paper-cuts of your ego – by this I am referring to all of the little insecurities that you can usually ignore, but that any public disgrace will magnify into a gaping stigmata, regardless if it was really your fault or not. You do this so that you can feel something, anything. 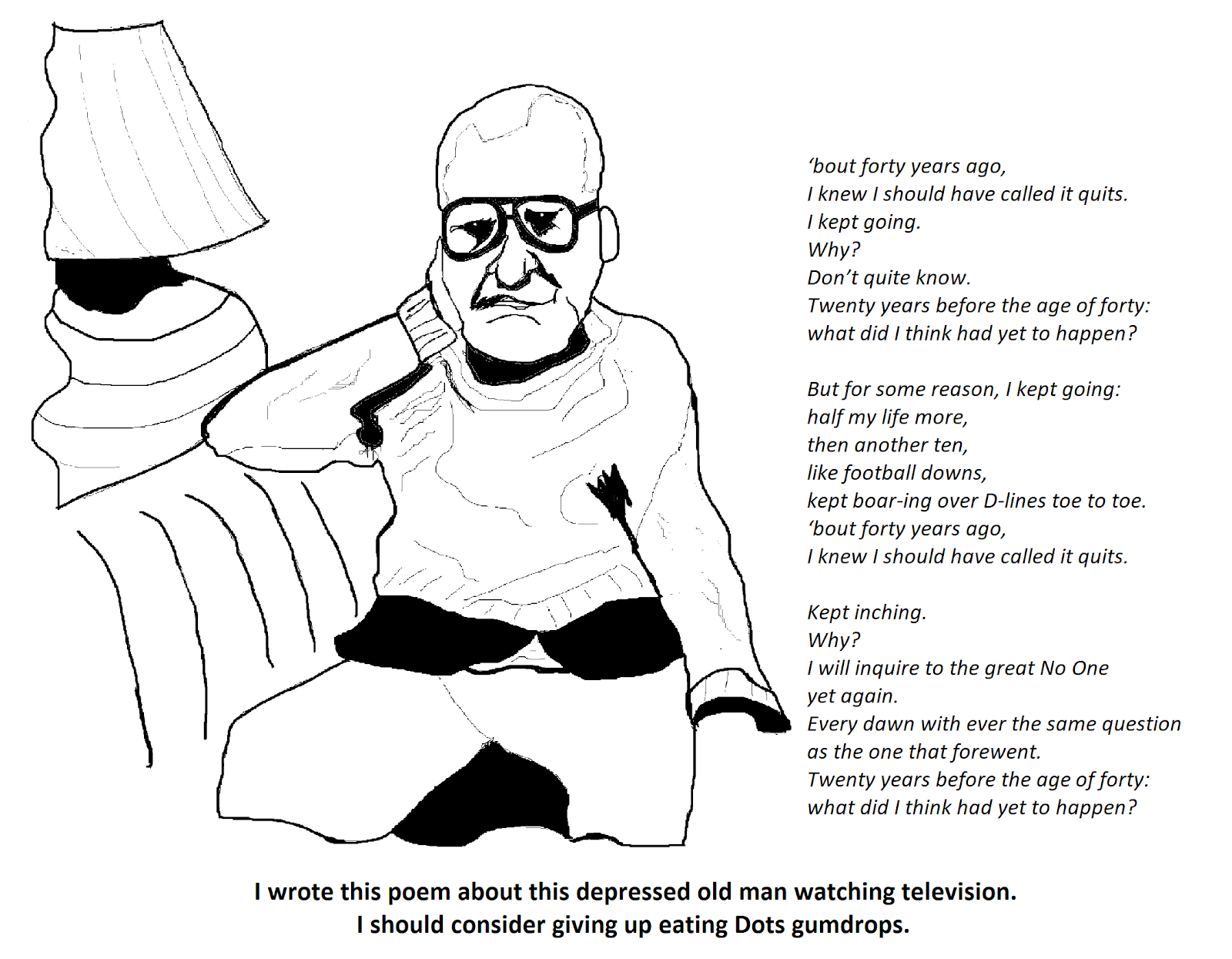 Also, I myself might have been imprudently drunk. Whenever I drink, my face gets ruddy, like a Cherry. (That’s all five flavors of traditional Dots mentioned! I did it! I really did it!) I might have had a bottle of King Cobra malt liquor that day because they sell it at the same Food Lions where I purchase my Dots, and Dots and King Cobra go stunningly well together.

Alas, what they do not go particularly well with is a top-notch sketch comedy performance. I’ll do better next time though; I’ll bet you a box of Dots.